Art Nouveau is a style of decorative art which follows the linear designs and curves of natural forms. Art Nouveau flourished between the 1890s and 1910 throughout Europe and the US, and was most often employed in architecture, interior design, jewellery, glass design, posters and illustration. 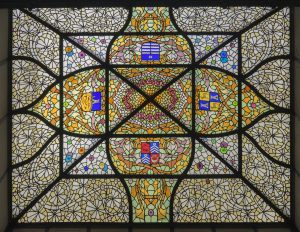 Barcelona is one of the most outstanding cities in terms of Art Nouveau. Providing the incredible work of Antoni Gaudí and other Modernista architects such as Lluís Domènech i Montaner, Josep Puig i Cadafalch, Joan Rubió i Bellver and Jeroni Granell i Manresa, as well as many more.

History behind the beginning of Art Nouveau

During the 19th century, Barcelona had a growing number of wealthy upper class people. The industry was booming and there was a growing wealth in the city, putting the upper class in a financially strong position in this politically stable environment. This left the rest of Spain to fall into a serious economic and mental depression caused by the loss of the colonies Cuba, Puerto Rico & the Philippines.

Furthermore, in this environment it was almost inevitable that the upper class used all their interests and means to promote the Renaixança. During this romantic revivalist movement the upper class explicitly favoured Catalan artists and architects who invented their own style and became wealthy and popular from doing so. It soon became a well known concept that the design of large and impressive buildings would allow you to surpass reputations of nobility. 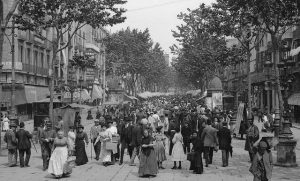 So where can we find the most impressive examples of art Nouveau throughout the city? This specific type of art has been flowering since 1859 when Ildefons Cerdà designed the beautiful Eixample area to make room for the growing population.

The best known patron was certainly the industrialist Eusebi Güell, who discovered the artist Antoni Gaudí. Güell then assigned many projects to his protegé including the stunning city palace of Palau Güell and Parc Güell. So let’s have a look at some of the other top places you can find Art Nouveau in Barcelona.

Where to find the best examples of Art Nouveau in Barcelona 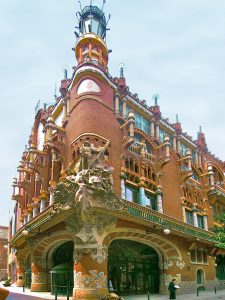 This is an unmissable work of art of a building. The Palau de la Música Catalana is on the UNESCO World Heritage List, and is located in the beautiful gothic area. The concert hall of the music palace is huge and impressively designed by the architect Lluís Domènech i Montaner.

Montaner was one of the leading representatives in Modernisme art, being one of the most renowned architects in Barcelona at this time. This incredible building was built from 1905 and financed by donations from wealthy merchants and industrialists. 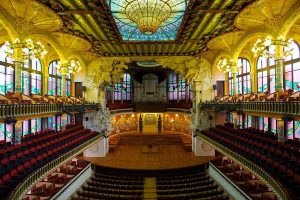 The facade is adorned with mosaic- decorated columns and is a serious must- see for those who love to admire beautiful art nouveau. If you would like to learn more about this piece of art, discover more about the Palau de Música Catalana.

In the 19th century, the president of the Holy Brotherhood, José María Bocabella, planned to build a church in Barcelona dedicated to the holy family “sagrada familia”. Gaudí influenced the construction of the Sagrada Familia significantly by guiding the architects with his plans, models and records. 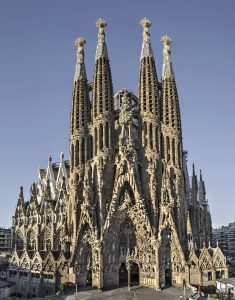 Today, the Sagrada Familia is not just profoundly religious but also a symbol of art and this is reflected in every single stone of the building as well as its facades and towers. The facades of this beautiful building are dedicated to the most important dogmas of Catholicism, and the origin, childhood and youth of Jesus.

Today the Sagrada Familia is one of the most famous buildings in Barcelona and is well- known as Gaudí’s best-known work. The temple itself has been under construction since 1882, and it is expected to be completed by 2026. For more information on this must- see artwork, read our blog on discovering the Sagrada Familia.

Visit the website for the Sagrada Familia here to book tickets

Another masterpiece of Gaudí is the Casa Battló, this impressive building demonstrates Gaudí’s style in every detail. The Casa Battló refers greatly to the legend of Saint George, as the patron saint and symbol of modernism. 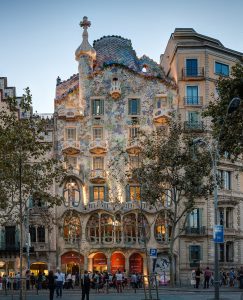 The roof of the Casa Batlló is shaped like a dragon with large, shiny scales, consisting of tiles on double attics, adapted to the organic architecture. This gorgeous building can be found down the Passeig de Grácia and is especially unmissable on the day of Sant Jordi where the building can be found covered in red roses. 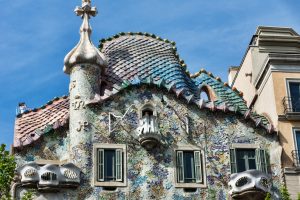 For more on Casa Batlló or the Celebration of Sant Jordi, read our blogs.

Visit the website for Casa Batllo here to book tickets

The Casa Milá is an incredible Quarry House with no right angles. This was in fact the last building of Antoni Gaudí before he devoted himself to the Sagrada Familia. This is in the Eixample district and is one of the most impressive buildings of art modernisme nouveau. This building is also listed as a world heritage site by UNESCO. 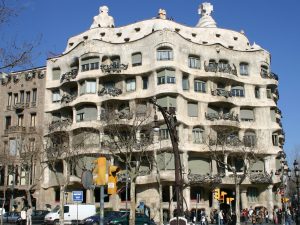 La Pedrera translates to “the quarry house”, getting its nickname of Casa Milá due to its unusual construction. The large stone slabs of the facade were first attached then worked on by the stonemasons. This building is rather colourless compared to the other work of Gaudí, making it unique and expressionistic.

This specific building is a perfect example of organic architecture, Gaudí used very little paint on this building to aim to keep the materials natural. The interior is just as impressive as the outside, with a natural ventilation system, making air conditioning unnecessary. To find out more information on the Casa Milà you can discover more in our blog.

Visit the website for La Pedrera here to book tickets

As one of the most magnificent buildings of Modernisme, the Palau Güell is located in the Raval area, just metres from the Rambla. Parts of the facade of the Palau Güell are reminiscent of a Venetian palace, with two striking oval gates at the front. 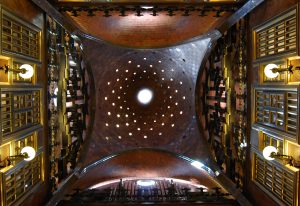 This is one of Antoni Gaudí’s earlier works, this was supposed to become a multipurpose building, with apartments, events and exhibition spaces. This was one of the first major projects Güell entrusted to Gaudí in the Barcelona Modernist style. To discover more about Güell’s relationship with Gaudí, check out our blog on Barcelona Modernism and the relationship between Gaudí and Güell. 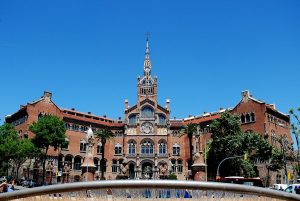 This amazing piece of art evolved from a mediaeval charitable home to a modern hospital since its founding 600 years prior. This is one of the most beautiful and significant modernistic complexes. This place is rather a complete work of art, with its colourised freshness, this is a beautiful complex from the time of Modernisme, and a masterpiece by Lluis Domènech i Montaner. 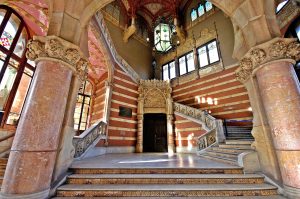 This is also on the list of UNESCO world heritage. This hospital has become something very special to the city of Barcelona, with it being surrounded by trees it has a somewhat very relaxed environment. It is a mediaeval and moorish influenced architecture, which is typical in Catalan art Nouveau. To learn more about the Hospital Sant Pau and its history, check out our blog on the world’s best modernist hospital.

Visit the website tiqets to book tickets to the Sant Pau Art Nouveau Site and skip the line.