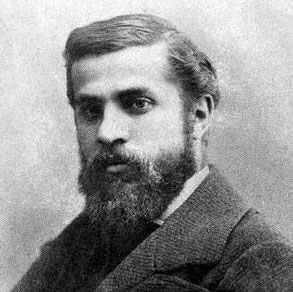 Modernist architecture is unquestionably one of the top sightseeing attractions in Barcelona, and the name on the tip of everyone’s tongue is Antoni Gaudí. Many other architects also made a significant imprint on Barcelona’s urban cityscape, especially in the Eixample district which was built during the Modernist period, but it is Gaudí who has become a household name.

He was born in 1852 in the Catalan town of in Reus and studied in Barcelona. When Gaudí graduated in 1878 from Barcelona’s School of Architecture, its director announced, “Gentlemen, we are here today in the presence of either a genius or a madman.”

One of the firmest supporters of Gaudí’s genius was the industrialist Eusebi Güell, with whom Gaudí shared a staunch Catholicism. Güell was a wealthy capitalist who met Gaudí early on in his career. He came from an entrepreneurial family; his father, Joan Güell i Ferrer, had made a fortune in Cuba, and returned to Barcelona with enough assets to become one of the key players in the early 19th century industrialization of Catalonia. This fortune and entrepreneurial spirit passed down to his son. Eusebi Güell also had enough sensitivity to recognize young Gaudí’s potential and take him under the wing of his patronage. He commissioned Gaudí with three important architectural projects, which are now recognized as some of the brightest jewels in the crown of Catalan Modernism.

This was the first major project that Güell entrusted to Gaudí, and was built during 1886-1890 in the Barcelona Modernist style. Located on Carrer Nou de la Rambla, just off Las Ramblas, this magnificent villa was designed as a city residence for the Güell family and for entertaining their high society guests.

The first things you will notice are the tall parabolic arches through which horse drawn carriages would pass. This leads to a large open space, divided by soaring arches, where the horses would rest and feed. A majestic staircase climbs up to the main rooms of the palace. Decorative cast iron railings, wonderful wood carvings, and Gaudí’s characteristic asymmetrical features immediately catch your attention. There are large bedroom with fireplaces, lavish living rooms, and sumptuous suites for entertaining. Make sure you visit the rooftop terrace and marvel at the exquisitely decorated ceramic chimneys. 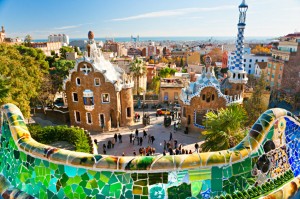 Eusebi Güell originally intended what is now Park Güell to be a luxury housing estate with space for sixty lots. Despite its spectacular location and ingenious proposed infrastructure only two houses were built before the project ground to a halt. The original vision was shelved, and the land was bought by Barcelona City Council in 1922 for use as a public park. Countless unique features make Barcelona’s Park Güell a top  sightseeing attraction for visitors, as well as a popular place for locals to enjoy a sunny day.

Gaudí’s mastery of asymmetrical forms and unusual shapes echo an aquatic wonderland, and the views of Barcelona and the Mediterranean are spectacular. Talented musicians play for appreciative crowds with everything from a 10 piece indie-ska band to oriental percussion, classical Spanish guitar and jazz. The ornamental part of Park Güell now has limited access and an entrance fee. This area includes the iconic dragon statue and pavilion area. We recommended that you book your ticket online in advance to avoid disappointment or queues when you plan to visit Park Güell.

In 1890 Eusebi Güell decided to relocate his textiles factory in Barcelona Sants to the countryside and build a new industrial colony just 30 minutes outside the city, in the village of Santa Coloma de Cervelló near Sant Boi. This model was already successfully being implemented by the local textiles industry, all along the Ter and Llobregat rivers in Catalonia. The colony was designed to be a self sustaining community and socio-economic organization; Güell wanted to provide the very best working and living conditions for his workers and their families. Comfortable family houses were made available, as well as schools, sports and leisure facilities, and medical care.

The church was a key aspect of community life, and Güell asked Gaudí to build a magnificent Modernist place of worship. Extensive plans were made, breathtaking geometric principles were developed, and the first part of the Güell Crypt was constructed. Undulating arches, non-linear columns and intricate ceramic mosaics spread out in a fan shape around a central altar. Although funding ran out in 1914 and only the first part was completed you can see the full plans in the visitor’s centre. This is a perfect day trip that takes you off the beaten track to discover this masterpiece of Gaudí’s architecture, whilst enjoying a pleasant day out in the Catalan countryside. Regular FGC trains go directly to Colonia Güell from Plaça Espanya.

It’s worth reflecting on the many fortuitous meetings of minds throughout history that together have provided fertile ground for the development of gifted potential. One cannot help but wonder what Batman would have been without Robin, Da Vinci without the De Medici, and Gaudí without Güell.