Since 1906 the famous Casa Batlló has been a spectacle in the city of Barcelona. Designed by famous architect Antoni Gaudí, the grand house exhibits intelligence, creativity, and diversity. Don’t miss this remarkable sight on your visit to the Catalan capital, just within the last 15 years the house has been opened to explore by the public. The colorful façade and smooth organic lines make this unlike anything else you will see in the city. 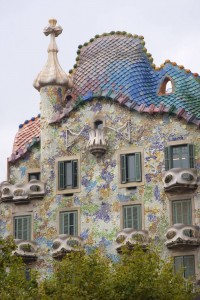 The Batlló Family and Gaudí

The original structure of the house was erected in 1877, in 1900 when Josep Batlló took ownership of the property on Passeig de Gràcia. He knew he wanted to make serious changes. Josep Batlló and his wife Amalia chose to purchase the original property because of its location but they never intended to keep it in its original form. Gaudí was selected to design the home because they knew he was capable of astounding and unique design concepts that would stand out against the rest. Batlló commissioned Gaudí to tear down the old house and build him a new one, but Gaudí was inspired by the simple house and insisted he would build around the existing structure.

It is hard to assume what inspired Gaudí because he was always thinking outside of the box, but it is evident that this house was meant to feel alive. From the cozy mushroom fireplace, to the loft ceiling resembling a ribcage, to the stained glass skylights that appear to be turtle shells, it is easy to see that the famous architect loved to replicate the beauty of life. Many people also believe that the colorful metallic tiles in Barcelona’s Casa Batlló and rigid arches of the roof are meant to represent the legendary dragon of Sant Jordi.

Mr. and Mrs. Batlló lived on the noble floor of the Casa Batlló until their death when the house was passed down to their children who in turn sold the house to an insurance company. The Batlló house was named a Cultural Asset of Catalonia in 1962 and shortly after in 1969 it was named a Cultural Asset of Spain. In 1970 the first refurbishment of the house took place, the interior of the structure was cleaned, the wood was treated, some of the stained glass was replaced to maintain its original appearance, and in 1983 the exterior balconies were restored. The next year lights were added to the outside of the house  illuminating the building. 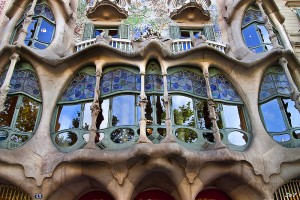 In 2002, the International Year of Gaudí, Casa Batlló opened the noble floor for the first time to be toured by the public. There was an unanticipated rush of success so the decision was made to keep the building open to the public. Over the years more areas of the house have been becoming available to visitors, now you can see almost the entire house.

Even if you have already visited before, put this attraction back on your bucket list to experience the ground breaking video guide that is now available when you tour Casa Batlló. This guide is unlike anything else in the city, as it combines 3D images with augmented reality to show you the house in a brand new way. As you explore the noble floor, take a look at your video guide and discover what that house looked like when it was furnished and lived in by the Batlló family.

Also new in 2014 is the updated Casa Batlló website offering an in-depth  historical timeline along with an amazing 360º visual tour of the house from top to bottom. The visual tour lets you chose your own path and explore every hidden corner all the way up to the rooftop terrace. On the new site, you can also find information about renting space in the house for events and parties and pricing for group tours.

Don’t forget to stop and…

Katherine is a Journalism student at the University of Cincinnati. She has recently relocated to Barcelona to gain experience as a travel writer and now contributes to the Apartment Barcelona guide and other online publications.