With measures lifting, it is looking more likely that you will be able to see more of what Spain has to offer this summer, it may be time to take a day to getaway. Day trips from Barcelona are a great way to experience one of the beautiful neighboring areas without straying too far from your base in the Catalan capital. Roman ruins, spectacular views of Catalonia and world renowned cuisine await you just outside the city, and are perfect for a summer outing.

So, what are you waiting for? 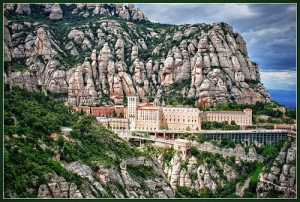 Montserrat is a holding place for Catalonia’s cherished spiritual sight: Santa Maria de Montserrat, a benedictine abbey. The famous monastery is tucked away in the mountain 1,236 metres above the valley. The beautiful basilica holds a museum where visitors can learn more about the religious area. If you stop by during a ceremony or prayer time, you’ll hear on of the oldest boys’ choirs in Europe perform. From here you can also catch some amazing panoramic views of Catalonia.

Hop on the Sant Joan Funicular Railway for aerial views of the monastery. It will take you up near the top of the mountain. Once the railway has dropped you off, there is a footpath up to Sant Jeroni, Montserrat’s highest point and the highest point in the Catalan lowlands. Some say that on a clear day you can spot Mallorca from the peak.

How to get there: Take the train from Plaça de Espanya to the bottom of the mountain. Choose between the cable car or the rack-railway to get you to the summit. 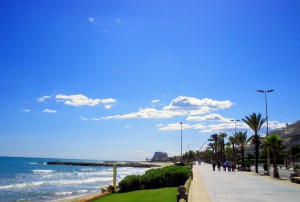 This beautiful beachside town is lively all day and all night. During the day visitors and locals grab a towel and head for a spot on one of the 17 beaches. You can also visit the old Church of Sant Bartomeu & Santa Tecla, an iconic landmark of Sitges.

Take a walk on the Passeig Maritim to explore the oceanside views. See the hillside houses, docks and beaches along the way. Stop for a bite at Nem Sitges, a highly rated tapas restaurant with monthly menus designed to feature the freshest foods.

This town is also known for its gay friendly atmosphere with a number of gay bars and events happening throughout the year. If you’re looking for dinner and a show, Queenz is the top rated spot in Sitges by Tripadvisor. The night starts off with a 3 course dinner and ends with a drag, theatre and a comedy show.

How to get there: Take the train from any of the three major stations in the city centre; Estació de França, Passeig de Gràcia and Estació Sants heading for Vilanova i la Geltru or St. Vincenç de Calders. 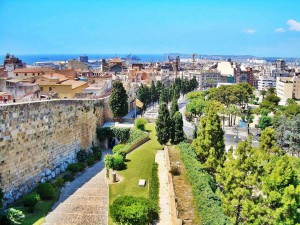 Visiting the Roman ruins in the ancient port city of Tarragona is a great summer day trip from Barcelona.

In its former life, this city was named Tarraco and was the vibrant Roman epicenter of Catalonia. It saw the rise and fall of empires and the Spanish Civil War. The marks of its past can be seen throughout the city today.

The amphitheater once showcased gladiators, beasts and even executions. It is now a ruin of rocky rubble open for entry or viewing from above. The Cathedral of Saint Mary is another popular site featuring Romanesque architecture, a cloister, and a Gothic bell tower. A bus ride and a short walk through a wooded park bring you to the Pont del Diable (point of the devil), the ancient roman aqueduct that once supplied water to the city of Tarraco.

How to get there: Take the train direct from Barcelona Sants Station. Alternatively, grab the bus from Gran Via 618. 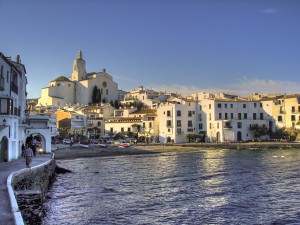 The old fishing town of Cadaqués has been a resting spot for many artists over the years including Pablo Picasso, Salvador Dali, and Max Ernst. The greek influence brought in by the seas can be seen in the white buildings that cling to the hillsides of the town.

Aside from the beaches and picturesque streets which make for a perfect summer day trip from Barcelona, you can also visit the Church of Saint Maria de Cadaqués which features Gothic architecture and a 23 meter high baroque altarpiece. Visitors can also hike to the Cap de Creus, a natural park that holds a number of anthropomorphic rock formations. You can also visit the Cap de Creus lighthouse or enjoy water sports in the area. After you work up an appetite, try restaurant Compartir. This place features a number of artfully crafted dishes that feature fresh seafood reminiscent of the town’s fishing origins.

How to get there: As there are no direct trains to Cadaqués,  you need to take the ‘line 3’ bus from outside the Estació del Nord. 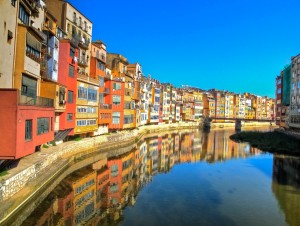 The medieval town of Girona features beautiful architecture and a labyrinth of narrow streets. Walking through this old city is a walk through history. Painted houses line the river Onyar. A 12th century Romanesque inspired bath house offers a taste of what life in this city may have been like.

Walk the wall of the Passeig de la Muralla, a narrow walkway atop the city border for a delightful summer stroll. Girona is also where the popular series Game of Thrones was filmed. Make sure to check out some of the great filming spots while you’re in the town.

If you’re feeling hungry, we recommend you make a reservation in advance and experience the culinary masterpieces at El Cellar de Can Roca. This restaurant, started by three brothers, was awarded 3 Michelin stars and  “Best Restaurant Award” from the Diners Club World’s 50 Best Restaurants Academy 2013 and 2015 awards edition.

How to get there: Catch the high-speed AVE train from Barcelona Sants Station.