In 2011, the Spanish newspaper El País reported a “revolution is occurring in craft beers” (cervezas artesanales), and they weren’t wrong as the craze spread from Madrid to Catalunya, and Valencia to País Vasco.

The history of beer in Barcelona is mainly associated with Estrella Damm and Moritz. The former has been brewed in Barcelona since 1876 and can be found in almost every bar and restaurant in the city; with the latter having recently been revived in 2004 after a 26 year absence due to bankruptcy, although it is now mainly brewed in Zaragoza. However, whilst the above beers may be just right for the locals, for many visitors and especially expats living in Barcelona, the variety and quality to which they are used to from home is not on offer.

Fortunately, many shrewd pub and bar owners have spotted this gap in the market and started to stock their bars with some of the best international brews around. This coincided with the previously mentioned Spanish craft beer revolution which has urged locals to start investing in their own independently owned micro-breweries – some even open a bar on the premises!

Some of our favourites 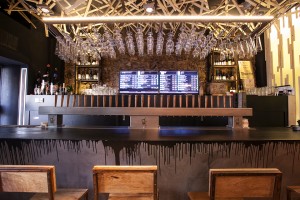 This gastro-pub is designed by the owners to share their passion of craftbeer and quality food with all its visitors. They have over 30 taps, ten of which of dedicated to their own house beer, with the other twenty featuring some of the finest international ale, lager, stout and everything in between! Order some hand-cut ham and some spicy patatas bravas and make your way through these delicious artisan beers in Barcelona.

If you’re into your beer then visiting the Cervecería Jazz brewery in the neighbourhood of Poble Sec is a must. This neighbourhood is located at the foot of Montjuïc and is home to many bars, restaurants and city attractions. It’s worth exploring before ending up at this buzzing craft beer joint. The music is an important element and the burgers even more so, but the best thing to do at the Cervecería Jazz (of course) is taste the beers. With a wide selection including beers from Germany, Belgium and England, you’ll find the supply never runs out! It offers a casual yet upbeat atmosphere and is one of Poble Sec’s benchmark hangouts. 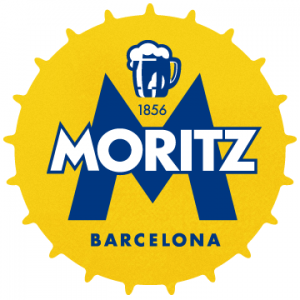 They call themselves “the Rolls Royce of microbreweries” and it’s hard to disagree. The Fábrica Moritz Barcelona embodies everything the brewery represents. Consume some of the freshly brewed unpasteurised Moritz on the ground floor whilst listening to some suggestions from gastronomic director Jordi Vilà. Equipped with a wine bar, a concept store and multi-purpose rooms for events, open from 6am-3am, this brewery in Barcelona has all the beautiful beer you can drink. 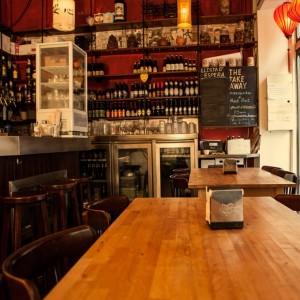 Not many people would put Vietnamese dumplings and craft beer together, but the people over at Mosquito do it brilliantly. This spot is a favourite for the trendy youth of Barcelona and the only problem with it is you may have to queue for ten or fifteen minutes for a table. If you’re happy to wait though (we strongly advise you do!) you will be presented with a Vietnamese tapas menu and some of Barcelona’s greatest artisan beers.

In the Sants district, in a building dating back to 1861, you will find this Barcelona beer house which since its foundation in 1985 has dedicated itself to expanding beer culture in the Catalan capital. Among the bench seats and chair of this dark tavern you will find the staff constantly pulling craft and commercial beers, with various Catalan beers and more traditional Belgian and Irish beers on offer both on tap and by the bottle.

Tags: barcelona food and drink bars barcelona things to do in barcelona

Jake is a modern languages student from the University of Bristol, currently living in Barcelona. His interests include music, film and travel.