Skip to content
Hit enter to search or esc to close
Home  >  Bars, Cafés and Restaurants • Culture • Food and Drink • Home  >  Vermouth in Barcelona: 5 places you need to try

Nothing is more Barcelona than a Sunday aperitif sitting out on a sunny terrace before lunch. You can realise this cosy concept with one thing, ‘vermut’.  Vermouth (as it’s called in English) is a peculiar drink made from fortified wine brewed with botanical herbs and typically served with an olive and a slice of orange.

There are various stories about the origin of vermouth. Recipes for brewing fortified white wine with additional ingredients date back to ancient Greece, whilst the drink’s name comes from the German Wermut, meaning ‘wormwood’ – one of the ingredients added, thought to aid stomach conditions. By the 1600s the drink had made its way to England where it took on the name ‘vermouth’, before being discovered by an Italian merchant who introduced the first sweet vermouth to Italy in the 1700s. Typically, white vermouths are dry and red vermouths are sweeter, but there are various grades in between to suit all tastes!

The use of the drink soon transformed from medicinal purposes to an aperitif and even began to be used in cocktails such as the Martini and the Manhattan. After making its way to the Catalan capital and becoming a quick favourite amongst the locals, many vermuterias opened across Barcelona, serving the drink all day long. Watch out for the word casero when choosing your vermut bar, it’s Spanish for ‘homemade’ which can either be a good thing or a bad thing, depending on your preference…one thing it does guarantee though is authentic taste!

So, you’re probably wondering where you can try this interesting drink and really live life like a local in Barcelona… without further ado, here’s a list of our top vermuteria picks! 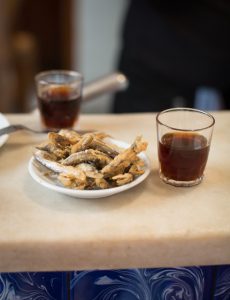 Whether you’re already a fully-fledged vermouth lover or you’ve never tried it before, this place is a must-visit in Barcelona. On the corner between two little alleys of the Gothic Quarter you wild find this gem, which dates back to 1945. Don’t expect any fancy modern bistro because the magic ingredient that makes this place special is its authenticity. The inside features old wooden barrels and bottles of vermouth lining the walls. Its menu is quite short but you don’t need much when the quality is so high – simplicity is key. Try the bread with tomato, fried fish and their famous tomato, onion and olive salad with one of the best vermut casero of the city; you will see that it’s possible to feel pure moments of happiness even in the smallest of hideaways! 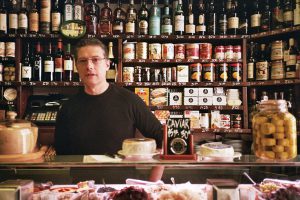 Not far from the bustling Avinguda del Paral.lel you will find this equally lively little bar which is a milestone for those on a culinary journey through Barcelona. Quimet y Quimet is a family business that started serving appetising tapas and delicious vermouth and wine back in 1914. The charming bar is quite tiny with only two tables but don’t let that disappoint you because the more crowded it gets, the more entertaining! While sipping your delicious vermouth and biting into some croquetas you will inevitably bump someone with your elbow and start a conversation with a stranger out of nowhere…all part of the fun and the friendly vibe! This is why Quimet y Quimet is the place to go when around the Poble Sec neighbourhood: excellent gastronomy and a buzzing atmosphere – you can’t go wrong! 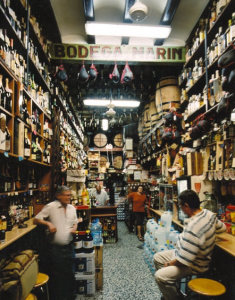 If you’re looking for a humble and traditional experience head to the most bohemian neighbourhood of Barcelona: Gràcia. This picturesque area, laying in the upper part of the city, is lined with cosy little bars and hidden squares, so inviting that it’s near enough impossible not to stop for a vermut. Bodega Marín is one of those special places – during its 100 years of history the tavern has been able to maintain its laidback and rustic atmosphere, mostly thanks to the family that started running the business in 1916. In fact, when you step into Bodega Marín, you won’t find yourself in a regular wine shop but actually in an old and unchanged wine cellar (bodega), with walls filled floor to ceiling with an incredible number of bottles of wine and of course, vermouth. Don’t expect ultimate comfort, there are simply a few stools perched underneath the bar but Bodega Marín is probably one of the most authentic and untouched places to visit in Barcelona. So forget your phone and get lost in a labyrinth of vermouth and good conversation with friends. 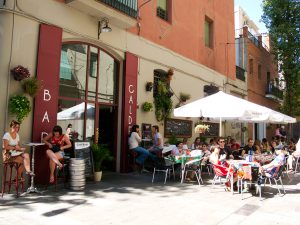 In Sant Antoni, modern hipster culture and Catalan tradition blend together into a lively neighbourhood loved by locals and tourists alike. Walking down Carrer del Parlament, the tall bright red entrance of Bar Calders will catch your eyes (and soon also your taste buds!). Don’t hesitate to step inside because not only is this bar wisely decorated with a mix of colourful touches and a large open air terrace, it also happens to be one of the best places for tapas and vermut in Barcelona. The exquisite homemade drink tastes even better when paired with some of their surprising tapas, traditional Spanish plates with an innovative touch – you must try the curried potatoes! Aside from the gastronomic delights you can also splurge on some literary treasures, as they have a second space which is home to a book shop and explains the name of the bar, homage to one of the greatest Catalan writers, Pere Calders. 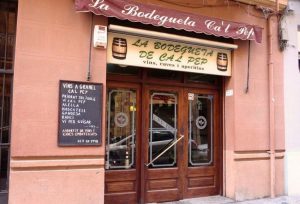 When it comes to fish and seafood what’s better than a waterfront city to taste to best the sea has to offer? Barcelona has, of course, a great range of seafood restaurants so it may come as a surprise that one of the best vermut and seafood tapas bars is located in Sants. Slightly further from the city centre than the other spots but well worth the visit, La Bodegueta Cal Pep is another place very high up on the authenticity scales! If you’re still not really familiar with the Catalan capital then you need to know that this area is quite far from the seaside and at times forgotten due to its location but the truth is that Sants has a lot to offer, especially in the food game, together with a relaxed atmosphere and charming squares and parks. A detail not to forget is that it’s considered to be one of the cheapest neighbourhoods in Barcelona and Cal Pep is no exception to this. Enjoy amazing seafood such as crab, octopus, mussels, and razor clams, of course all washed down with a chilled glass of vermouth…it’s enough to make you cry with joy!

With this little guide to vermouth in Barcelona, you can enjoy this spectacular and out of the ordinary aperitif, paired with some delectable food, at some of the most authentic hangouts in the city. Trust us, you won’t be disappointed!