Barcelona is renowned for the Modernist architecture that blossomed along its streets in the 19th and early 20th century with colourful, innovative and functional buildings; even in their wildest dreams Antoni Gaudí, Domènech i Montaner and their contemporaries surely can’t have imagined the impact of their legacy on Barcelona’s tourism industry. Medieval and Gothic buildings such as Barcelona Cathedral nod to a more distant past, whilst postmodern creations and renovations by award-winning architects are liberally scattered along the Barcelona skyline.

Buildings can be considered an “architectural work” when they are popularly perceived as cultural symbols and works of art. With so many that hit that spot in Barcelona, these are 7 of the top ones and not the Top 7…which would be considerably more difficult to pick out! 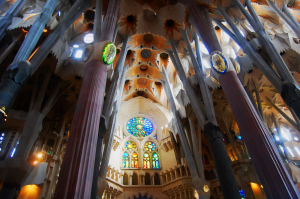 Gaudí’s magnum opus has a complex structure that is packed with more sacred geometry and symbolism than the average tourist will ever grasp or have an interest in. Yet even without any knowledge of its more esoteric aspects the visual effect is always breathtaking.

High spires reach up to the skies, sweeping arches shelter intricate engravings and stained glass windows draw the Barcelona sunshine into its lofty interior. The first stones of the Sagrada Família were laid in 1882 and its completion is scheduled for 2026.

This is one of the most important Gothic cathedrals in Europe and is dedicated to Santa Eulàlia, Patron Saint of Barcelona. If you cast an upward glance towards the highest spire you’ll notice a statue of Eulàlia looking down and protecting the city where she was tortured and killed for her religious beliefs at the age of 13.

The perimeter of the cathedral is full of altars dedicated to significant saints, each decorated with iconic statues, religious art and some exceptionally beautiful carpets. Candles are lit by the devoted and the randomly inspired, usually accompanied by a prayer and a few coins. 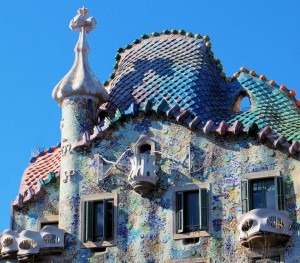 This house was renovated by Antoni Gaudí and stands out like fairytale castle on the elegant Passeig de Gràcia, with its inventive adornments and colourful composition.

Gaudí’s original designs and asymmetrical curves continue inside the Casa Batlló, and reveal how deeply he was influenced by nature and the organic shapes found under the sea.Look out for details such as the wavy window frames, cavern-like ceilings and chimneys covered with mosaics of coloured ceramic tile.

Barcelona’s Modernist concert hall was built by the architect Lluís Domènech i Montaner between 1905 and 1908. There’s always a crowd of holiday snappers outside, getting busy with catching this outstanding building at the best angle. The main concert hall has a large domed skylight made with thousands of pieces of coloured glass. Its lavish decoration includes statues dedicated to renowned composers and the creative muses. Catch a concert to enjoy its world-class acoustics and take a guided tour to discover the spectacular rooms and spaces. 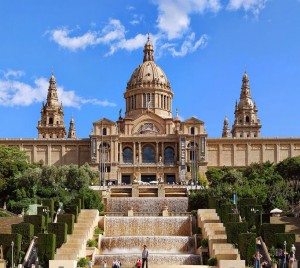 Barcelona’s most prestigious art museum, the National Art Museum of Catalonia (MNAC), fills this building. It is located at the foot of Montjuïc at the end of Avinguda de la Reina María Cristina where the Magic Fountain shows take place.

Its construction in the classic Spanish Renaissance style was completed in 1929 for the International Exhibition in Barcelona. As the museum’s collection grew, extensions were added to the Palau Nacional and several new wings were inaugurated in 2004 to house new acquisitions.

It’s the cultural icing on the cupcake of Barcelona’s trendy Born neighbourhood; a magnificent Medieval basilica built between 1329 and 1383. This was the era when Spanish galleons ruled the waves and the merchant district of the Ribera bustled with seafarers, merchants and all kinds of trade people. The basilica’s sparse decorations gives the interior an ethereal feel, and its high ceilings adorned with heavy liturgical lamps draw your gaze up towards the heavens. 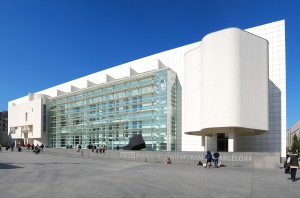 This building can be likened to the largest Russian doll; it’s a work of art that contains many more works of art inside. The MACBA was designed by New York architect Richard Meier and established in Barcelona’s inner city Raval neighbourhood between 1991 and 1995.

Art critics define its look as a “formal reinterpretation of rationalism”, in the style of Le Corbusier. Its rectangles, curves, and clear glass play with the light and shadows to create a stunning backdrop for the skaters who have made the adjacent square their playground of choice in Barcelona.

Looking for a place to stay in Barcelona? Apartment Barcelona has over 900 apartments to rent across the city! Book yours today…