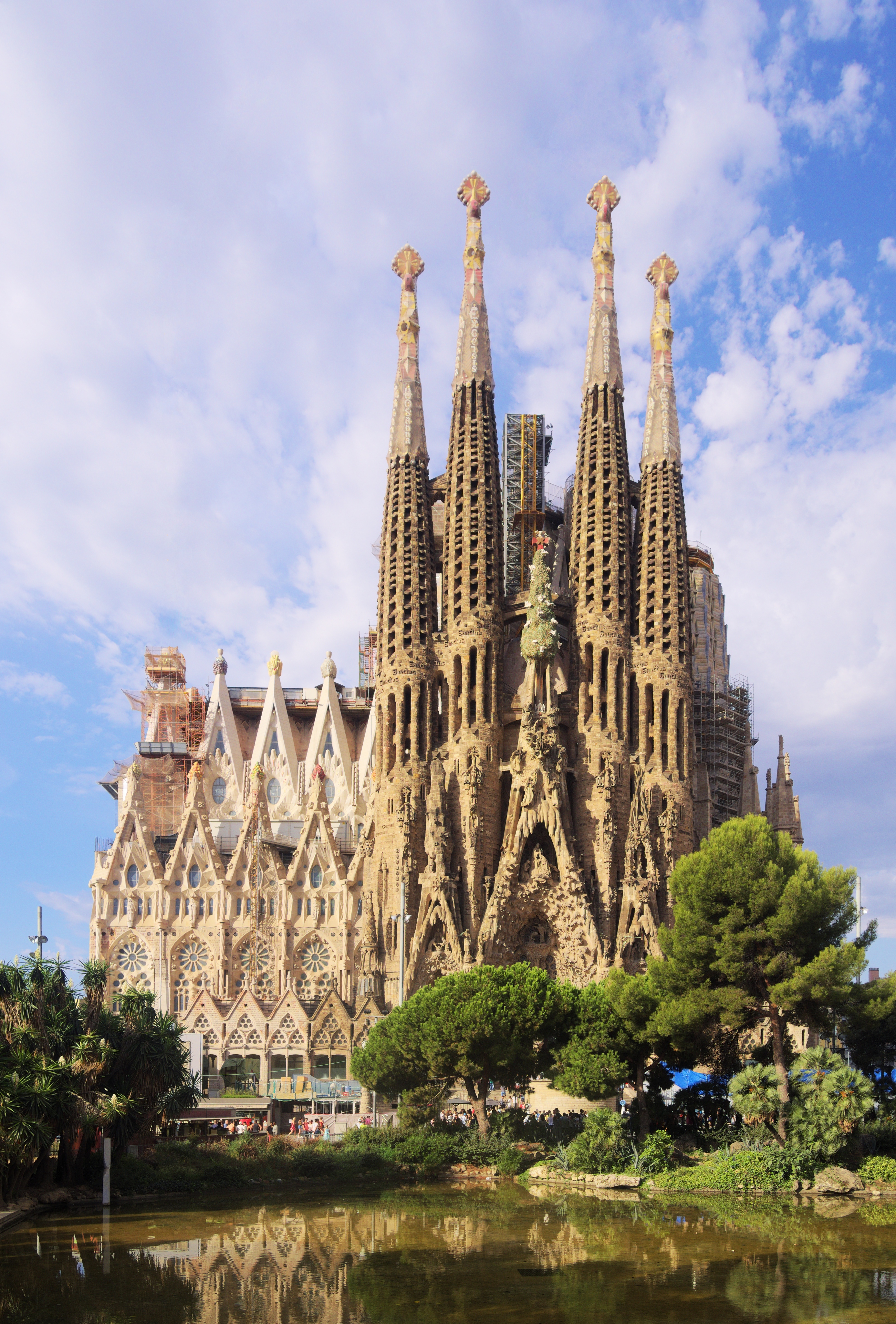 Built by the world famous architect, Antoni Gaudí, the Sagrada Familia is Barcelona’s most well-known monument. With its tall appearance, it can be admired from all vantage points in and around the city. Being visited by people from all over the world, it has its own metro stop that gives you a great surprise when you come up the stairs and it towers over you. We thought we’d give you the opportunity to get to know the Sagrada Familia from your home, with its trademark features, interior and amazing rooftops that capture the imagination brilliantly. This way you will know what to look out for on your next visit to Barcelona.

The first thing that you will be able to enjoy when arriving at the Sagrada Familia, is its beautiful facades that reveal stories through their artistic design. With two on offer, the original one is known as the Nativity Facade, which nods towards the story of Christ and the journey of life. From animal sculptures, to depictions of the Bible, this facade invokes a deep understanding that allows you to interpret it in many ways. Built between the 1890s and 1930s, Gaudí wanted the figures of this facade to be painted, as a way to give new life to it. Even though this did not become reality, it is truly breathtaking. 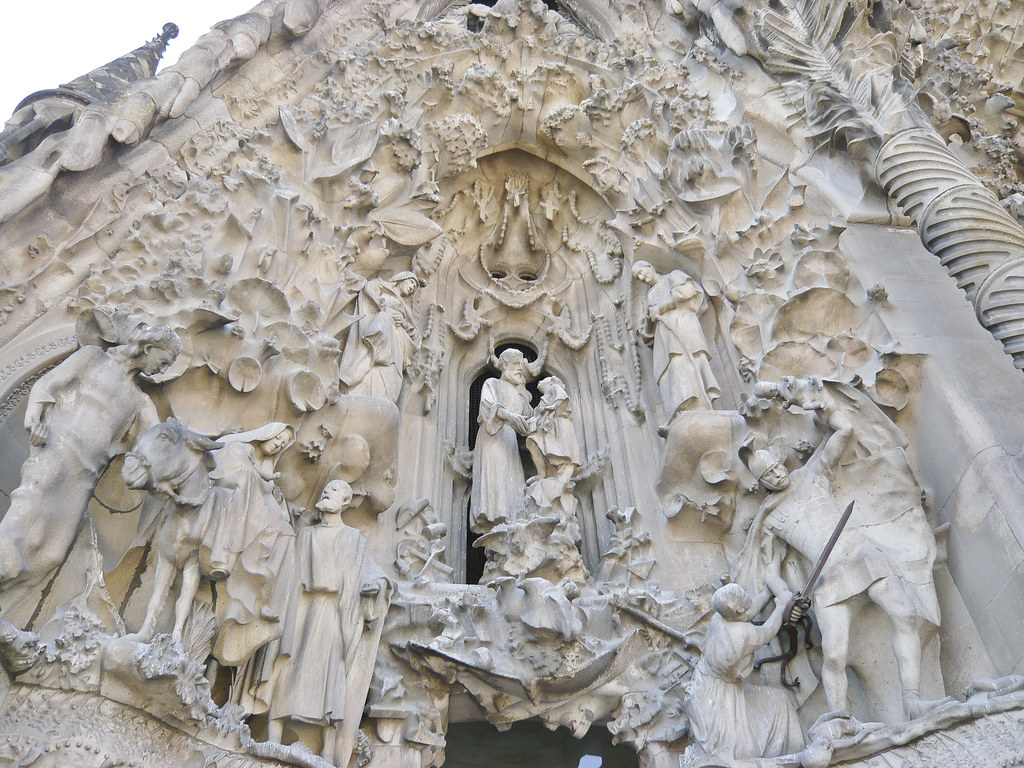 The second facade is much more recent, known as the Passion Facade, it was built second as requested by Gaudí, as he thought that if the work started with this brutalist exterior, then the people of Barcelona would lose interest in the building before its completion. His rationale behind this meant that the Nativity Facade would attract positive interest at the start, with him being able to freely design the Passion Facade. This, another piece of religious imagery, shows bare stone in a way to represent bones, that works to complete an image of the crucifixion of Christ, as a way to show the sins of man. This brutal design captures the eye and leaves most disturbed- exactly what Gaudí would have wanted. Divided into three sections, the base shows the Last supper and the Judas kiss, the second alludes to the crucifixion and presence of the three Marys: with the upper section symbolising the burial and resurrection. A tall and imposing piece of architecture that reminds us of La Pedrera in Barcelona. 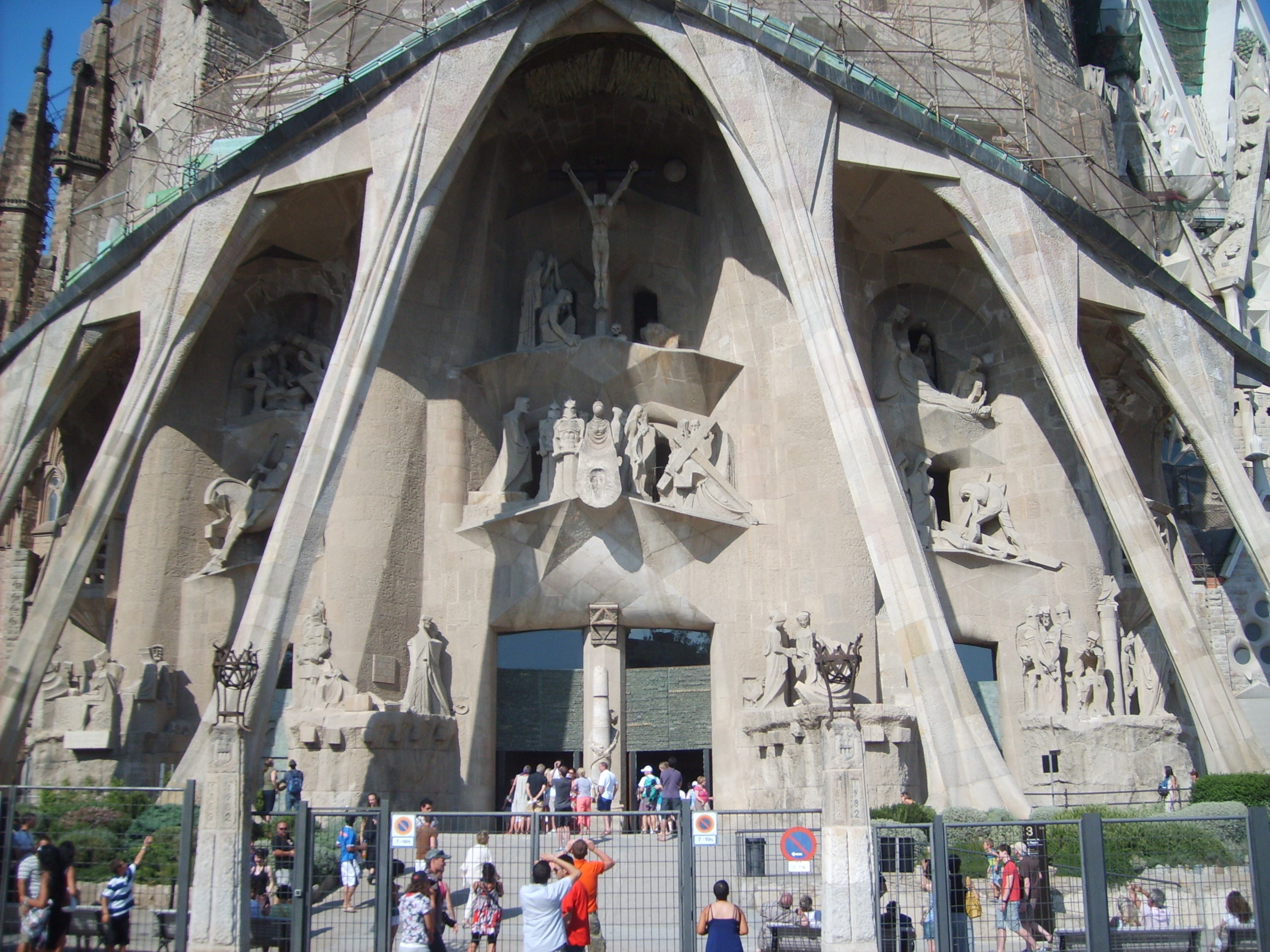 The third and final facade is known as the Glory Facade and is the largest of the three. With multiple entrances and lots of glass windows, it represents death, judgement day and eternal glory. Construction started in 2002 and the most eye-catching part of this facade is likely to be the Eucharist Door, completed in 2008, that reads the Lord’s Prayer on it. 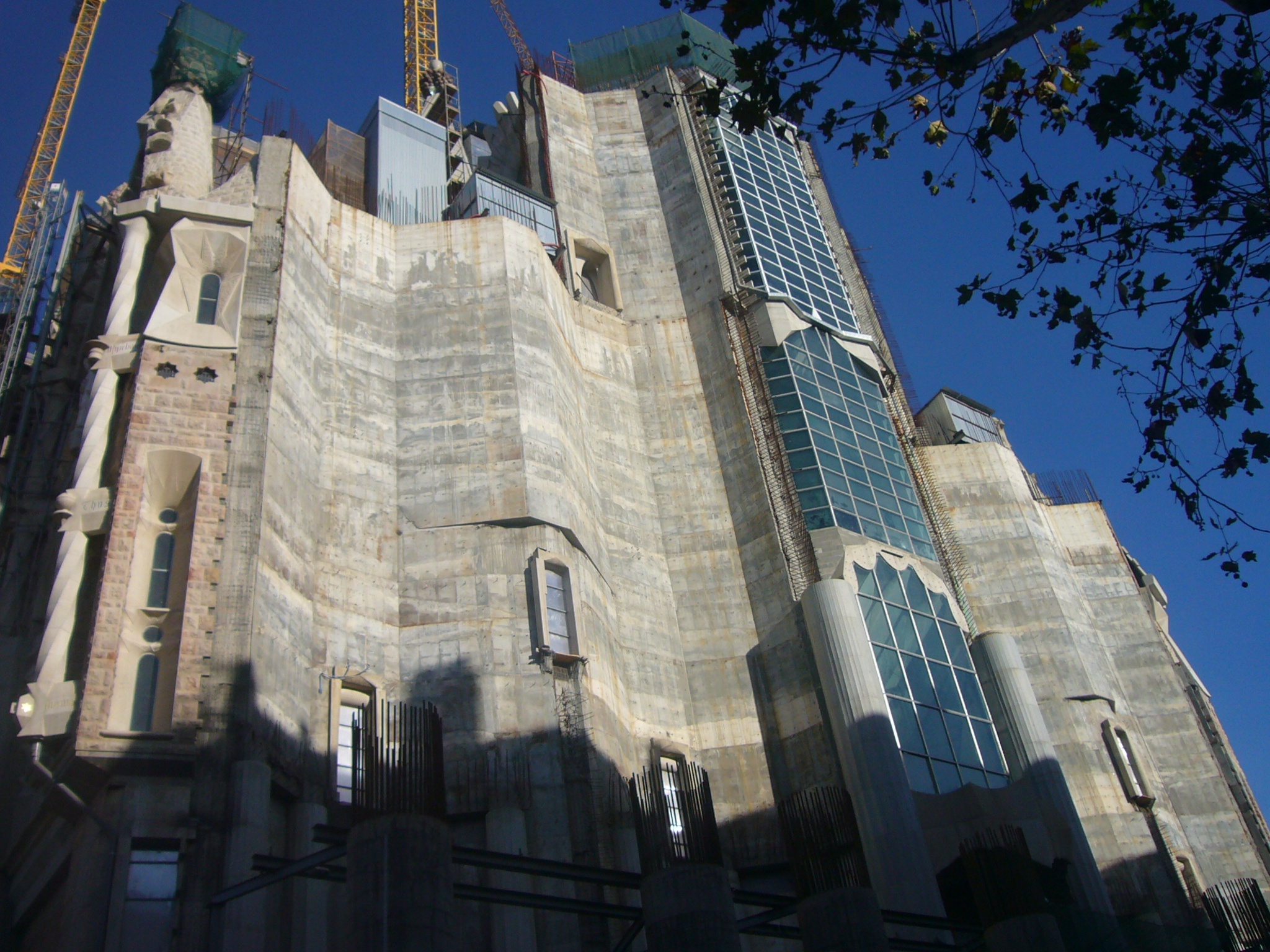 As amazing as the exterior of the Sagrada Familia is, the art continues on the inside of this magnificent basilica. As the cliché goes, words do not do this place justice. With amazing architecture, this place shows tall and curved ceilings and imposing pillars, the sheer design of it is unseen elsewhere in the world. Tying this emblematic foundation together, is the clever layout of the many stained-glass windows, mostly of modern design, light simply dances around the basilica and fascinates all who visit. 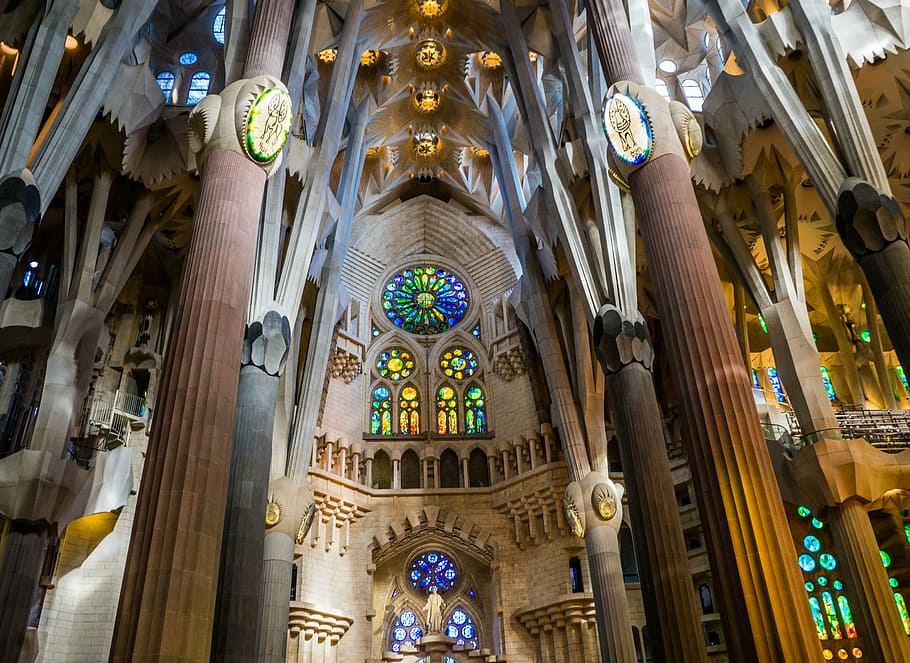 The most unique piece of the entire interior is definitely the use of windows in the roof, that give a number of spotlights and beams that give a heavenly glow. In addition to this, there are of course pews and an altar, with a suspended cross above it, as well as there being a crypt and Gaudí’s tomb– but more on that later. 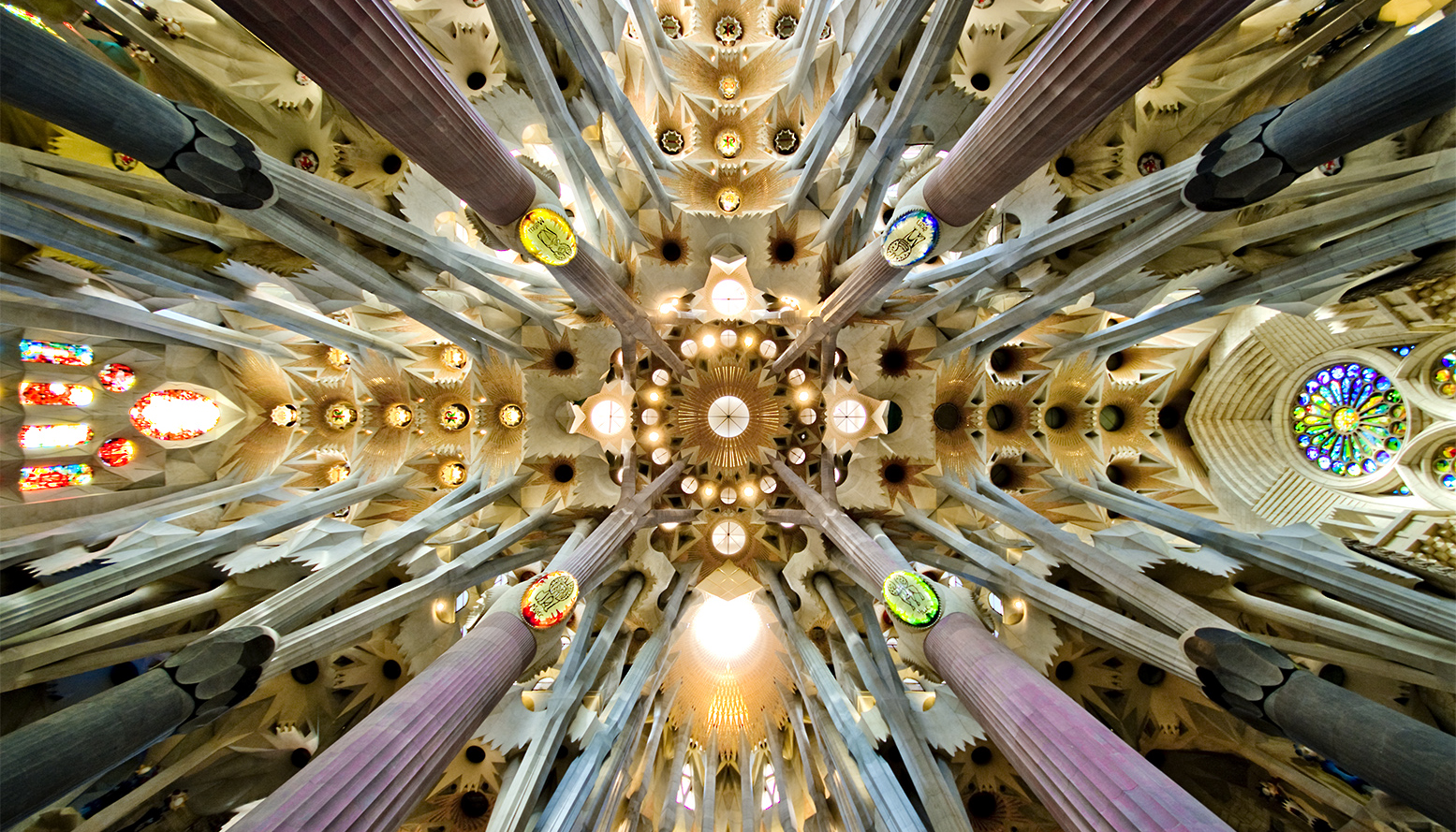 Once the Sagrada Familia is completed, the roof will be the most iconic part of the building. We say this because it is where all the towers will come together and also where Gaudí has left some surprises. His iconic sculptures that cover Parc Guell and the roof of Casa Batlló, colourful and tiled finishings that act as his signature, will be found on the top of the Sagrada Familia. Moreover, as you can see on the Sagrada Familia virtual tour, the roof is home to an unbelievable panoramic view of Barcelona, giving you a view of the city from the heavens. We cannot wait until this work is finished! 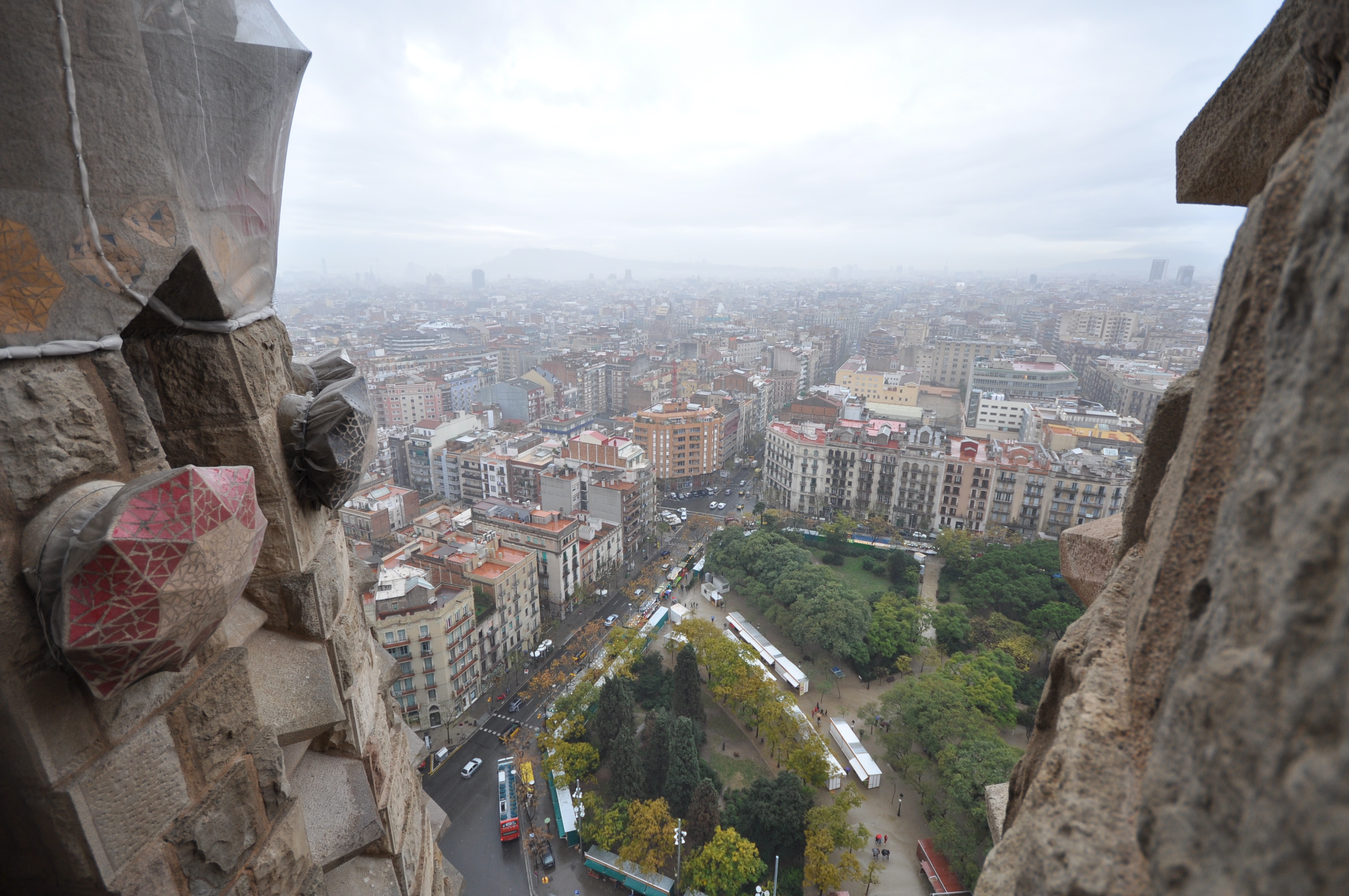 Lastly, it is important to remember that the Sagrada Familia in Barcelona is the final resting place of Antoni Gaudí (1852-1926). Found in the crypts of this basilica, this quiet and peaceful part of the Sagrada Familia allows for us all to reflect on the brilliant life that Gaudí had and the amazing work he did, that transformed Barcelona like no other person has done before, or since. There is also a small chapel here, allowing for group worship in this secluded part of the Sagrada Familia. One other person is also buried here, he is Josep Maria Bocabella, a local philanthropist who thought up the idea of having the Sagrada Familia in the late 19th Century. Without him, Gaudí would have had no real reason to build this amazing work of art, and Barcelona would be without one of its most famous monuments. We’re very thankful for Bocabella and, of course, Gaudí. 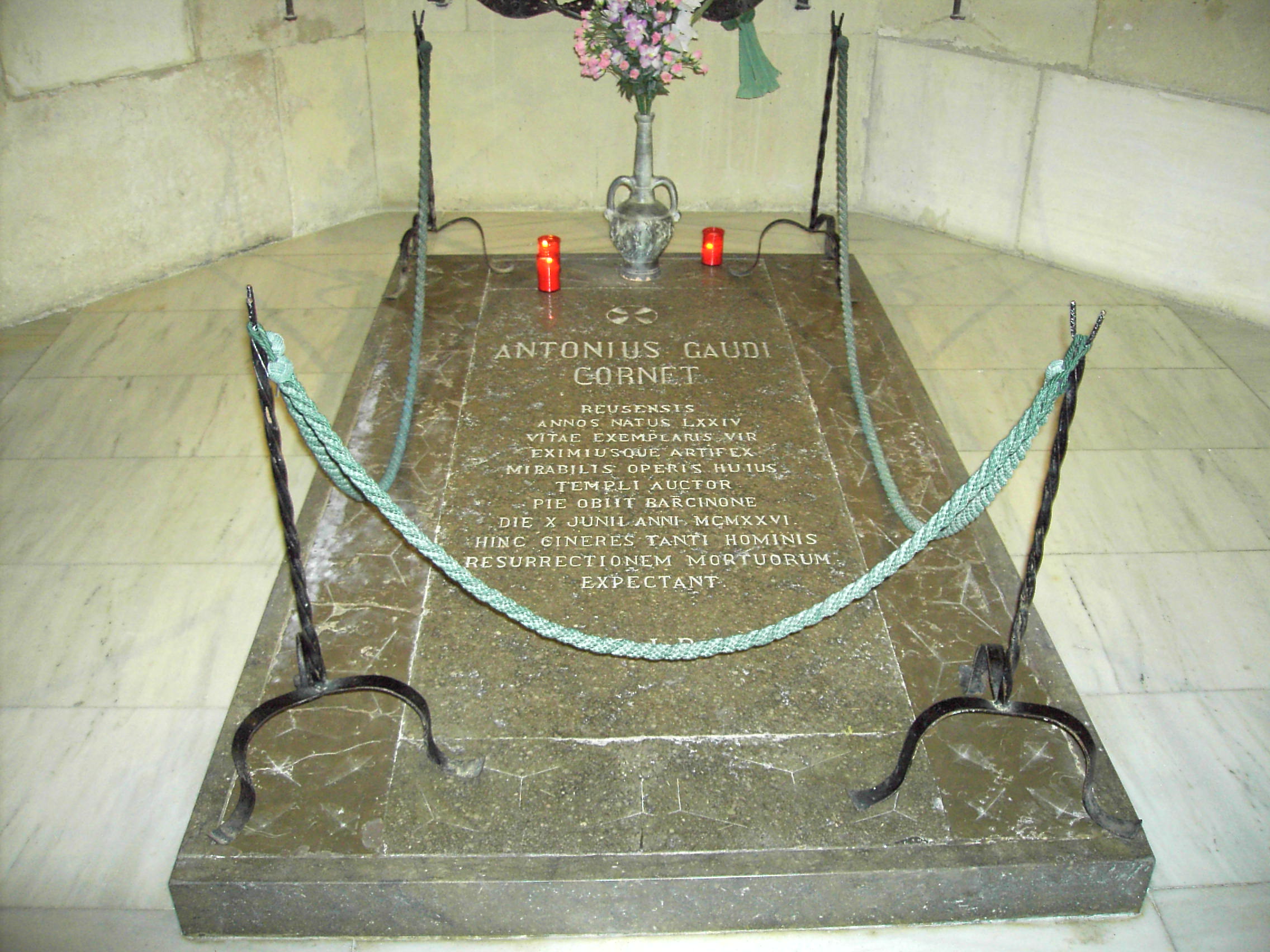