You simply need to walk around Barcelona to see its amazing architectural aesthetic: Modernisme, or Catalan modernism. This cultural movement appeared in Barcelona at the end of the 19th century, and has been embodied in many of the city’s sensational structures like world-famous Sagrada Família. Modernism is similar but not exclusive to the Art Nouveau movement, and through visiting the many examples of Modernisme in the city, you can take a step back in time and discover the history of the Barcelona that we all know and love today.´ 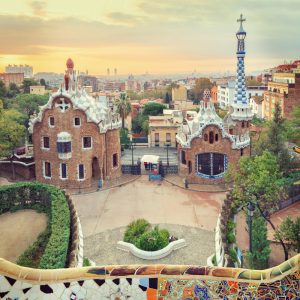 Known for its Hansel and Gretel fairy-tale design, Park Güell was designed by Antoni Gaudí at the start of the 20th century. Eusebi Güell, who the park was named after, first bought the land in 1899, with the idea that his architect friend would design and create an urban park inspired by gardens in England. The design of Park Güell was also influenced by nature, much like Gaudí’s later work.

Antoni Gaudí played a huge part of bringing Modernism to life in Barcelona, and his short-term residence in Park Güell has been converted into a museum with more information about the life and works of the incredible Catalan architect. 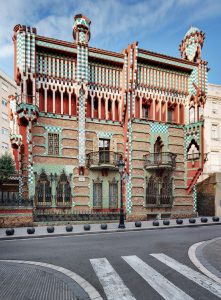 When the house was built, the neighbourhood of Grácia and the home of Casa Vicens, was a separate and independent village with its own city council. When Gaudí was just thirty years old, Manel Vicens i Montaner asked the Catalan architect to design him a new summer residence for his family, but it took decades for the property to be recognised for its unique architectural value.

Nearly 150 years later, Casa Vicens was finally opened up to the public as a house museum in 2014. 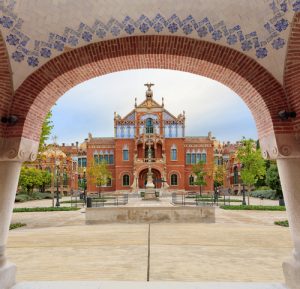 The Hospital de la Santa Creu i Sant Pau is the oldest hospital in Spain and was founded in 1401 after the plague and famine caused six of the city’s medieval hospitals to merge together. The hospital functioned until the early 1900s and one of the last patients was Antoni Gaudí who was taken to the hospital after he was seriously injured from a tram accident in 1926. Just four years later, the hospital closed its doors.

The hospital was then redesigned by famous Catalan architect Lluís Domènech i Montaner, and in its time became the first hospital in Spain to have its own school of nursing, to enforce an institutional charter of patient rights (1976), to launch a customer care service (1979), and to offer bone marrow transplants (1976) and heart transplants (1984).

Famous for his previous architectural feats in modernism, Montaner’s new hospital design also gave life to the city’s up and coming cultural movement, and has become an important modernist landmark in Barcelona. 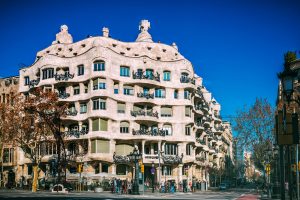 La Pedrera, or Casa Milà, was the last private residence designed by Antoni Gaudí, before he devoted himself to his extraordinary project of building the Sagrada Família.

The building was commissioned in 1906 by Pere Milà and his wife Roser Segimon, and at the time was a controversial topic among those living in Barcelona due to its garish stone façade that caused many to give the house the nickname, La Pedrera, or the stone quarry.

In 1984, it was declared a UNESCO World Heritage Site, and today is one of the most visited tourist sites in the city. 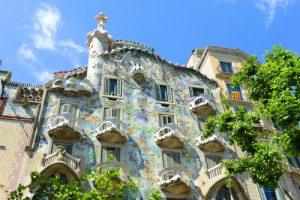 Another one of Gaudí’s famous architectural creations, Casa Batlló was first built in 1877, and then redesigned in 1904 after its owner, Josep Batlló, wanted a unique house that no other family member would be able to imitate.

Because of the somewhat skeletal qualities of the house, Casa Batlló is sometimes referred to as Casa dels Ossos (House of Bones). On special days in Catalonia, such as Sant Jordi in April, Casa Batlló is often decorated to mark the event. For example, last year the façade of the building was covered in hundreds of red roses to mark the celebration of Catalonia’s patron saint.

Casa Amatller is an important Modernisme style building designed by the Catalan architect Josep Puig i Cadafalch, under the commission of famous chocolatier Antoni Amatller Costa.

Today, the only the ground floor of the building is open to visitors, home of one of the finest stained-glass windows of the modernisme era. 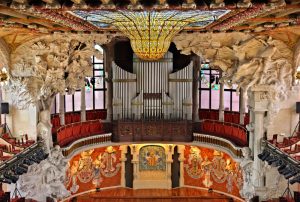 This concert hall has seen some of best international artists from all over the world perform on its stage, having been created by the order of the Catalan choral society.

Upon its completion in 1908, the building was inaugurated as an auditorium for concerts of orchestra and instrumental music, but has since seen many other performances such as cultural and political ceremonies, and theatre plays. The palau was designed by Lluís Domenech i Montaner, and is largely known as one of the most representative buildings of Catalan modernism.

How to complete the Barcelona Modernist Route

We recommend starting the route at Park Güell and working your way down through the city until you reach the Palau de la Música Catalana. Why not check out our personalised Modernist Route map that will guide you to and from all seven of the spectacular and unforgettable modernist landmarks mentioned above.