As one of the most visited cities not just in Spain, but also in the whole of Europe, Barcelona’s large crowds mean that it is also prone to pickpockets and thieves. And unfortunately, as a tourist, you are often one of their main targets.

But don’t let that put you off coming to the city. There are plenty of steps you can take to stay safe when you’re out and about in Barcelona, many that are also common sense. And if something does sadly happen during your stay, there are many security and emergency services available to help you recover any lost property or report a crime or theft.

Is it safe to travel in Barcelona? 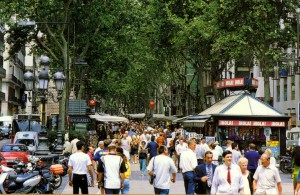 Barcelona is as safe as any other big city. Compared to other holiday destinations, there is relatively little vandalism and street fights in Barcelona, however there are areas with an increased number of beggars, and illegal street sellers who might make you feel uncomfortable if they approach you- especially if you don’t speak the local language.

Make sure that you carry the minimum with you, leaving your passport, any unnecessary cash or credit cards, or any other important documents in your hotel or apartment. There will most likely be a safe place for you to store these items in your room.

Pickpockets usually commit theft in the most touristy places in the city, for example along La Rambla, on the metro, and around other busy landmarks.

Carry your bag in front of you or across your chest so that you always have your eye on it. Stay vigilant and trust your instinct.

The main Police Force of the Spanish government responsible for issuing passports and ID cards, doing border checks, and fighting against crime. In smaller towns or villages, you can also find the Policía Local/Policía Municipal, local forces that take care of those living in the area.

The Military Police Force of the Spanish government responsible for guarding borders, roads, the coastline, the airport, and other high-risk places. 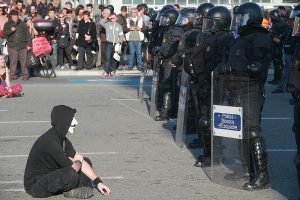 The Police Force of the Government of Catalonia responsible for dealing with criminals and robberies, as well as protecting against terrorism and other big threats to the city. They are also used during protests and rallies to control crowds.

The local Police of Barcelona responsible for looking after those living in the city. They help with general city safety including traffic accidents, road incidents, as well as issuing fines and arrests.

What do you if you have an emergency

You can reach the Emergency services in Barcelona by calling 112.

The Police, The Fire Brigade, or an Ambulance will be dispatched according to the situation.

If you need medical help but it is not an emergency, you can go to the nearest hospital or seek medical advice by calling 061. Take into account that those working might not speak English well.

Loss of documents or theft

If it is your wallet that has been stolen, don’t forget to block any stolen credit cards and to ring your bank straight away. You can request provisional travel documents from your consulate/embassy in the city.

If you lose any other valuable objects, contact the Oficina Municipal de Objetos Perdidos in Barcelona. They have an online form you can fill out which allows you to enter your data and see if your object has been found. This service is only available in Spanish or Catalan. Lost objects can also be reported by calling the Municipality.