For many years now holidaymakers from all four corners of the world have been visiting Catalonia. The north-eastern province of Spain with its buzzing hub of Barcelona and its extensive coastline is has long been a favourite for culture vultures and beach lovers alike. However, in recent years the beaches surrounding the famous city have become rather overcrowded and, at times, a little dirty. This has led many people to seek new and uncorrupted beaches along the coastlines of the Costa Brava and the Costa Dorada.

Catalonia has one of the most picturesque coastlines in all of the Mediterranean with kilometres of unbroken beaches popping up along the entire length of the region, often with very few buildings around them. We have taken a look at some of our favourite and most hidden beaches in Catalonia.

Cala Garvet
This special spot is found just before entering the small seaside town of Colera on the Costa Brava. Here the sand is plentiful and the water clean and transparent. The atmosphere is very tranquil as there are few people and no shops, so make sure to pack a picnic before heading to this hidden beach of Catalonia. 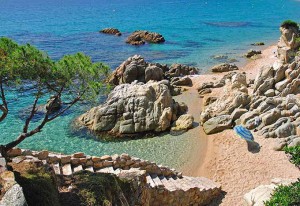 Cala Pola
Located just 10km up the coast from the seaside town of Blanes, Cala Pola is tiny at only 70 metres long, but is a truly beautiful beach. With the most crystal clear waters one is likely to find on the Spanish coast, this spot is a must when hunting for the most hidden beaches in Catalonia.

Cala Pedrosa
Situated to the east of Girona on the Costa Brava coastline you’ll find one of the most untouched and hidden beaches of Catalonia. This tiny cove is the perfect place to get away from the hustle and bustle of Barcelona so don’t come here expecting restaurants and water sports. You’ll be left to be at one with the world in this beautiful and serene beach in Catalonia. 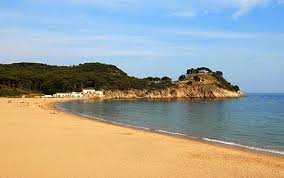 Platja de Castell
When residents of the local town Palamós demonstrated against the development of Platja de Castell the beach hit the headlines. The locals won and we’re thankful they did as this beach is now one the most pristine stretches of beach remaining on the Costa Brava. There is a xiringuito (snack bar) for a chilled beer or a seafood snack but it hasn’t spoiled the beach which is still as beautiful as is was for the locals’ grandparents and without doubt is one of the best beaches on the Costa Brava. 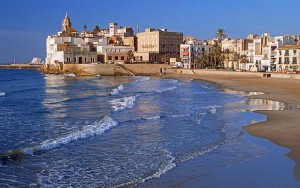 Located just a thirty minute train ride to the south of Barcelona is the small fishing town of Sitges. This town is famous for its gay-friendly atmosphere (the Sitges carnival in February is a highlight of the year) and it boasts an impressive seventeen beaches, many of them being gay and nudist beaches. However, there are of course some family beaches, both close to town and a little outside – make sure to visit the cove at Platja de les Anquines, one of Catalonia’s most hidden beaches,  for some peace and quiet. 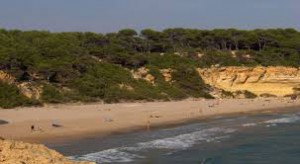 Calas at L’Ametlla de Mar
This seaside town is also known as La Cala due to the high number of coves in the area. Of course, there are coves which are more famous, such as L’Alguer, Pixavaques, Sant Jordi y Calafató; however, there are also a lot of lesser known spots. Make sure to check out the cove at Cala de Llop Marí.

Cala Fonda
Situated 10km from Tarragona on the coastline with the Midas touch, the Costa Daurada, Cala Fonda, also known as Waikiki is one of the most beautiful beaches in Catalonia. It is a clothes optional beach but don’t let that put you off as the scenic setting really is worth it. Head north from Platja Larga and through the Bosc de la Marquesa to reach this great and hidden beach.

L’Ampolla
Located just north of the delta in the south of the Costa Dorada is the charming fishing village of L’Ampolla. With some of the best beaches in the Catalonia and also some of Europe’s most delicious rice dishes, there really is no reason not to visit this gorgeous village. This part of the coastline is one of the most untouched and best conserved areas – make sure to check out Cap Roig, a stunning beach surrounded by vegetation which is one hundred percent Mediterranean. 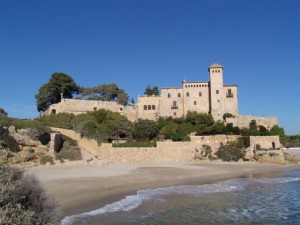 Tamarit
Lying just to the north of Tarragona, this beach takes its name from the castle which looks over it. It’s a truly typical Costa Dorada beach which stretches one thousand metres and is backed by vegetation. The calm waters make this beach the perfect spot to wind down and relax and is certainly one of the best beaches of Catalonia.

Jake is a modern languages student from the University of Bristol, currently living in Barcelona. His interests include music, film and travel.

Spending New Year’s Eve in Barcelona? Good choice! From beach parties to light shows, plus plenty of fantastic fiestas at some of Barcelona’s top clubs, find out all about the celebrations on offer for NYE 2022 in Barcelona as we see out the decade in style!