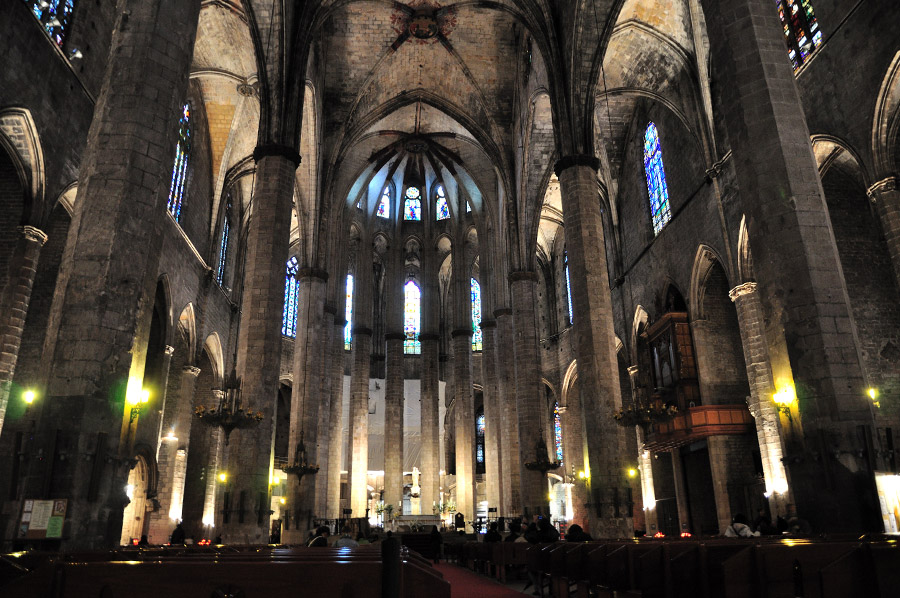 Barcelona is a city full of beautiful architectural treasures especially with its vast selection of stunning churches, monasteries and cathedrals. Situated within and just outside the city, they play a vital role in understanding the Catalan capital’s rich historical culture and are ideal if you’re seeking to explore Barcelona off the beaten track. We’ve selected the most fascinating churches in Barcelona for you to marvel at and thanks to their clandestine status, hopefully it’ll be a welcomed break from battling your way through hordes of tourists! 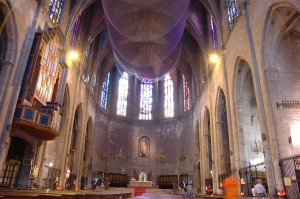 Nestled between the picturesque Plaça del Pí and the Plaça Sant Josep Oriol lies one of Barcelona’s most prominent churches and is a frequently visited on city walking tours. This magnificent building is characterised by its simplistic exterior and interior which is contrasted by its vast stained-glass, rose window at the entrance- one of the largest in the world.

Not only do people flock left, right and centre to witness the church’s sheer beauty on such a monumental scale but also to enjoy the fantastic views from the top of the bell tower. Boasting privileged and unbeatable views of the city, it really is one of the city’s best kept secrets. At weekends, there’s the addition of an art exhibition where over 40 painters display their work. Art with a view, what could be better!

The church also has a museum which houses a fascinating collection of gold and silverware and medieval funeral escutcheons which are unique to Catalonia. 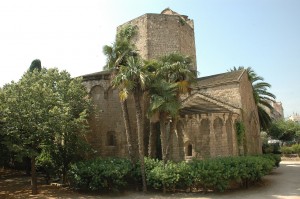 If you’re interested in delving deeper into Catalonia’s interesting historical past, a visit to Barcelona’s oldest church and former Benedict monastery is a must. Tucked away in the quirky Raval neighbourhood, this place is a haven of peace with its beautiful and serene grounds which are a stark contrast to its immediate surroundings.

Built in the Lombard Romanesque style, it was originally founded in the 800s. This Barcelona church has certainly stood the test of time despite it having endured multiple attacks and reconstructions, namely the Muslim invasion in 985. This, however, has done nothing to diminish its charm and enchanting character making it a great sightseeing spot if you’re seeking to escape the hustle and bustle of the city. 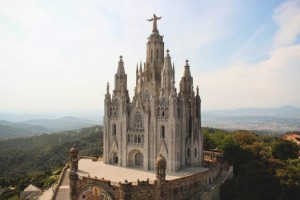 Temple of the Sacred Heart of Jesus

Jutting into the Catalan sky with its pointed towers is Barcelona’s version of the Sacré-Coeur, set atop Mount Tibidabo. This elegant white building was intricately designed by the incredibly talented, Enric Sagnier and his son completed the church 60 years later. The Sarat Cor church is evidently inspired by both modernista and neo-gothic architecture giving it a truly unique silhouette and ensuring that it is one of the most iconic sights in Barcelona, despite being situated in the outskirts of the city.

Despite being a working religious temple where public liturgies are regularly held, most visitors come to admire the statue of Jesus Christ which is reminiscent the Christ the Redeemer statue in Rio de Janeiro. From here, you are also able to enjoy wonderful views of the entire city which extend as far as the Montserrat Mountain.

Grand in every aspect, this is one of the few churches able to rival its centrally positioned counterparts, La Sagrada Familia and the Gothic Cathedral (La Seu).

Tip: The best way to get here is to take a train of Ferrocarrils de la Generalitat de Catalunya (Line 7) from Plaça de Catalunya to the station Avinguda Tibidabo. Then change to the funicular and take the bus No. 111 from there directly to the temple. 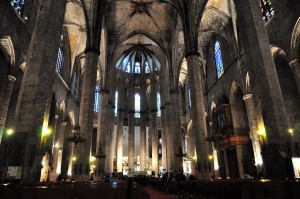 A perfect example of Gothic style architecture, it is possible Barcelona’s finest church with its spectacular facade- no wonder its one of the most sought after wedding locations by lovebirds wanting to seal the deal in the Catalan capital. Located in the trendy El Born district, it is renowned for the remarkably short amount of time that it took to build the structure- a mere 54 years which considering it was built in the 14th century is extremely impressive. Its unique structure which, to put it simply, comprises of three naves underpinned by columns set apart 13 metres apart, which was a groundbreaking design for a medieval building.

What’s more, you are able to discover this ornate temple for free and unlike other churches, photography is permitted bearing in mind that you’re respectful. Keep an eye out for music recitals, often baroque and classical which perfectly complement the harmonic atmosphere of the church.

Tip: If you’re looking for a holiday read, the historical novel ‘Cathedral of the Sea’ is a great pick, especially as the the construction of the Santa Maria del Mar plays a key role in the story. 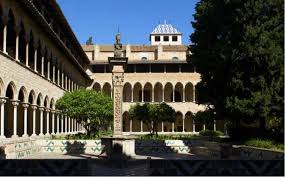 After more than 10 years closed to the public due to restoration purposes, the monastery is considered to be one of the most beautiful buildings of the Catalan Gothic. This three-storey monastery is located in the more secluded and peaceful outskirts of the city making it the perfect day trip to those looking to discover the hidden gems that Barcelona has to offer.

Highlights of the monastery include its surrounding gardens as well as the museum which is housed in the former dormitory of the monastery. It’s impeccably maintained gardens allow you to enjoy total peace and serenity so why not bring a book along and perch under the palm trees in the cool shade. Follow this, by popping into the nearby museum if you’re into religious art. 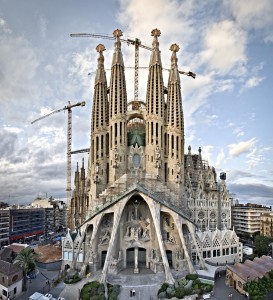 Drum roll please… Barcelona’s emblematic Sagrada Família has entered its final stage of construction and is set to be finished by 2026- almost 150 years after building began, about time! If you only have time for one sightseeing outing during your visit to Barcelona it should be to Europe’s tallest religious building which not to mention, is possibly the most impressive structure you will ever lay eyes on.

This extravagant, awe-inspiring temple, designed by yours truly, Antoni Gaudí, is the finest example of his visionary genius making it a worldwide symbol of Barcelona and one of the most famous cathedrals of all time. Its façade is simply spectacular and once complete, it will feature eighteen towers dedicated to religious figures including the Virgin Mary and the four evangelists – Matthew, Mark, Luke and John. Their varying heights are designed to reflect their hierarchy.