Gaudí’ architecture in Barcelona includes some of the city’s top sights, from the Sagrada Familia Basilica, to the unique Modernist constructions of Casa Batlló and La Pedrera on Passeig de Gràcia, and the magnificent Park Güell. When Gaudí’s patron, the industrialist Eusebi Güell decided to relocate his textiles factory to a specially built industrial colony near Sant Boi, he commissioned Gaudí to build the “crypt”, or church. It’s an easy day trip from Barcelona and well worth visiting. 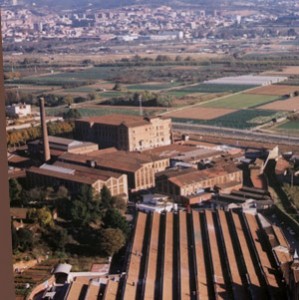 Step back in time to Catalonia’s Industrial Revolution

As you step off the train at “Colonia Güell”, just half an hour from Barcelona, the fragrant countryside air carries a loud chorus of birdsong across the fields. It seems hard to believe that at the height of the Industrial Revolution, during the 18th and 19th centuries, this was a bustling hub of the Catalan textile industry.

Textiles have always been an important industry in Catalunya, dating back to the 13th century when Barcelona, Terrassa and Sabadell were noted for their fine cloth. Centuries later the Industrial Revolution started in England and quickly spread throughout Europe. The introduction of steam power, water wheels, new iron-making techniques, and the consequent development of machinery gave birth to mechanized processes of mass production. Nowhere was this more evident than in the textile sector, and Catalonia was quick to adopt and implement the new technologies.

Like other cities that were undergoing rapid transformation during this period of industrialization, the social conflicts of a growing urban population were being felt in Barcelona at the turn of the 19th century. This was one of the factors that influenced Eusebi Güell’s decision in 1890 to relocate his textiles production from Sants, in Barcelona, to a new industrial colony in Santa Coloma de Cervelló, based around his building Can Soler de Cervelló. 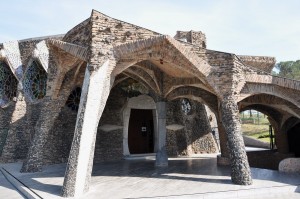 The colony was designed as a self sustaining socio-economic organisation and community, which incorporated everything that the workers needed for a well balanced life. There were houses, schools, recreational areas for them and their children, and leisure facilities.

Güell wanted to provide the best possible living and working conditions for his workers. He enlisted the talents of noted Modernist architects, such as Francesc Berenguer and Joan Rubió to execute projects like the Sant Lluis cultural centre, the Ateneu Unió theatre, a school, and some very well constructed houses. Many families from the poorer rural areas came to work on the colony as it offered a higher standard of living than they could afford in the countryside. 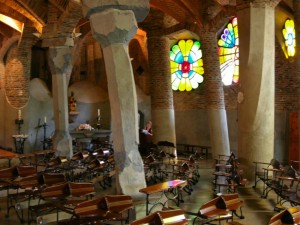 The church was a focal point of community life, and in 1898 Güell commissioned Gaudí to build a place of worship. Gaudí seized the opportunity and developed extensive plans for a magnificent Modernist church, with his trademark non-linear columns, undulating arches and aquatic influences of an underwater wonderland. The congregation would sit in a fan shape around the central altar, a use of the space which created a real atmosphere of unity.

Gaudí’s original plans, which can be seen in the nearby visitor’s centre, included two naves and a 40m high central dome. Funds dried up and in 1914 the project was left unfinished. However, the completed crypt is truly spectacular, with breathtaking stained glass windows, intricate ceramic mosaics like those in the Park Güell, an asymmetrical exterior whose details confirm the same hand that conceived the Sagrada Familia, and swooping porches under which one can visualise the workers of another century chatting amongst themselves.

As the textile industry fell into decline its operations were scaled down until it was finally closed in 1973. Workers were offered the first option to buy their house, and local institutions and businesses bought up the land and factory spaces. In 1990 The Colonia Güell was declared a Property of Cultural Interest and Historical Ensemble.

It’s open from November to April every Mon-Fri 10:00-17:00, weekends & holidays 10:00-15:00.
Opening times from June to October are every Mon-Fri 10:00-19:00, weekends & holidays 10:00-15.
Tickets cost around 7€ and include access to Gaudí’s church and the Visitors’ Centre, with exhibitions presenting the colony, the textile industry, and Gaudí’s vision.
To get there, take the FGC train for Igualada, from Pl. Espanya, which stops at Colonia Güell.
If you’re there for lunch, El Ateneu restaurant does a great menu del dia.