Think you already know everything about Gaudí? Think again! We all know that Gaudí is famous for his incredible architecture, mostly found in Barcelona, however he also has a few lesser-known (but equally as beautiful) architectural masterpieces across Catalonia and other regions in Spain. The beautiful crypt, situated in the Colònia Güell village, is one of his most impressive works and is located just 23km from Barcelona, in Santa Coloma de Cervelló, making it the perfect spot for a day trip filled with plenty of culture and history! 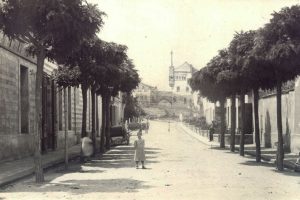 A little bit of history

In 1890 Gaudí’s patron and industrialist, Eusebi Güell, had to move his textile factory outside of the city of Barcelona to Santa Coloma de Cervelló due to social unrest. The new project involved the creation of an industrial village with amenities to improve the workers’ quality of life: terraced houses, a theatre, a school, several shops, gardens and a church, now known as the Crypt, were included in his innovative urban planning concept. A bunch of leading modernist architects were involved in the construction of the village, resulting in beautifully designed buildings, and Gaudí was commissioned to design the church, which is nowadays a hidden tourist spot and a UNESCO World Heritage Site.

In 1973 the factory closed due to the crisis in the textile sector. In the year 2000 refurbishment finally began on the more than 20 unique buildings of the Colònia Güell. Nowadays it is still a calm village with a lot to discover when exploring Gaudí’s path through Catalonia. 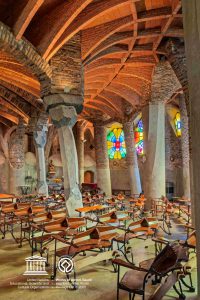 What you can visit nowadays, known as the Crypt of Colònia Güell, was originally planned to be the church of Colònia Güell. The Crypt is a highly impressive artwork and one of Gaudís hidden treasures. According to the plan, the building consisted of an upper and lower nave, towers at the sides and a belfry measuring 40m in height. Gaudí was given total freedom and unlimited budget to build the church from his patron Eusebi Güell, although in 1914, when the lower nave had been completed, the Güell family withdrew the funding for the project and the building was left unfinished until today.

The church became a laboratory for Gaudí’s architectural innovations: catenary arches, twisted columns and unusually-shaped vaults. When you take a closer look, you can discover the decorative broken mosaic tiling, known as “trencadís”. Basically the Crypt was a huge experiment and lead to many revolutionary building solutions that were later used on the Sagrada Familía. Finally, the Crypt was declared a World Heritage Site by UNESCO in July 2005. 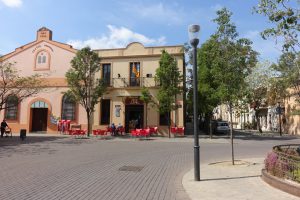 In addition to Gaudi’s church, the Colònia Güell gives visitors the opportunity to explore its beautiful streets while admiring the most important Catalan artnouveau or modernist buildings of the village, which are a must for those interested in architecture and history. Especially considering the time when the village was built, the concept of Colònia is quite extraordinary. Specifically, this meant that the families lived in relatively comfortable single-family homes, had access to education and culture, medical care, and a better social life. 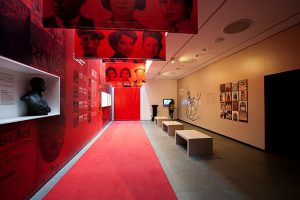 For a more detailed insight you can also visit the interpretation centre inside the former workers’ cooperative. The centre has a permanent exhibition that provides information about the village and the crypt in particular.

If you visit Colònia Güell on a Saturday, you can enjoy the farmer’s market and buy some local and seasonal fruits. Every Saturday morning, agriculturists from the Baix Llobregat come to the village and sell their fresh products and hand-crafted items to residents and visitors of the Colònia Güell. 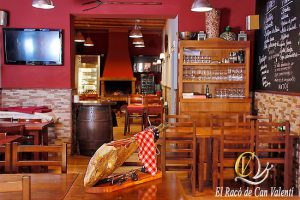 When strolling around and discovering all of the beautiful buildings, you may become a little peckish. Whether you’re looking for snacks, lunch or dinner, the restaurant El Racó de Can Valentí offers plenty of delicious Catalan dishes. Another more affordable option is Granja Güell Cafetería offering tasty churros, café and healthy snacks in a cosy atmosphere.

How to get there

The easiest way is to get there by FGC trains (Ferrocarrils de la Generalitat de Catalunya) from Espanya railway station to Santa Coloma de Cervelló with the lines S33, S8 and S4. The station of arrival is literally called ‘Colònia Güell’, so there should be no confusion on where to get off the train! Once at the station, you just need follow the blue footsteps to the Visitors’ center, then you’re ready to explore!

For more information and ticket prices, check out the Colònia Güell’s official website.