Described by some as the gay capital of southern Europe, Barcelona has undoubtedly become a favourite destination for gay tourists from all over the world during the past 20 years. The city is known for having an open and liberal LGBT lifestyle, with a vibrant gay scene and plenty of cool clubs, bars and restaurants, especially within the Eixample and Gràcia neighbourhoods. Check out this guide to the top spots, parties and events! 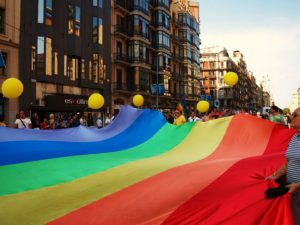 A City of Diversity

Although Spain in general is a Catholic country, where many people still stick to traditions, Barcelona has become a top choice for gay tourists and residents over the last few decades. After Franco’s death in 1975, a radical change took place in the Spanish society. With its origin in Madrid, a huge movement called La Movida began to take place in many cities across Spain. La Movida was all about freedom of expression and experimenting with ‘taboos’, which contributed to the beginning of a growing gay community across the country. Nowadays, although the gay scene in Barcelona is still more geared towards men, there are plenty of lesbian bars and clubs as well. Welcome to the city of diversity! 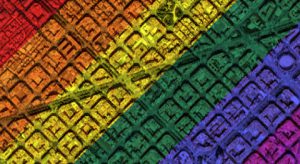 The heart of Barcelona’s gay scene lies within the vast Eixample district, nicknamed Gayxample or Gaixample due to its endless amount of LGBT bars. The blocks around Carrer de Casanova, above Gran Via de les Corts Catalanes, are full of fantastic gay hangouts, stylish restaurants, trendy boutiques, sex shops, nightclubs and occasionally, gay saunas. The area with the most gay bars and clubs is located near Carrer de la Diputació and Carrer d’Aragó. Some of the most popular bars in the Eixample area include Punto BCN Café, Atame and Moeem Bar.

If you’re not ready to hit the hay after a couple of drinks with your friends, Barcelona’s most famous gay club is also nestled in the streets of Eixample. On Thursday, it’s known as the Aire club, and on the weekend it’s named Arena Classic. Expect a fun-filled night with go-go dancers, cage dancers, affordable drinks, and make-shift dark rooms. Another great option, which is very close to Arena and Plaça de la Universitat, is Metro club, one of Barcelona’s top gay clubs with multiple dance floors, dark rooms and extraordinary shows.

Previously its own independent village, Gràcia is known today in Barcelona as being a one of the city’s most trendy neighbourhoods. Home to plenty of cool bars, cafés and restaurants, it comes as no surprise that you can also find a lot of LGBT hangouts in this area. The New Chaps Gay Bar on Avinguda Diagonal is highly recommended as a top spot to grab a beer in a chilled atmosphere, with very friendly and attentive staff. If you walk up the street in the direction of Plaça del Sol, you will find Café Tenderete, offering craft cocktails and delicious vegan tapas. 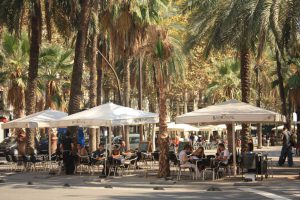 Not many people know that the first lesbian bar in Barcelona (La Sal) was in fact situated amongst the winding streets of the Raval neighbourhood, on Carrer de la Riereta. Today, the neighbourhood is growing in popularity amongst the LGBT community and there are plenty of top gay and lesbian hotspots such as La Casa de la Pradera, who serve a free tapa with every drink and Pervert Club, where you can usually find a younger crowd and electronic music.

During the daytime there is also plenty to do, and with Barcelona’s warm climate and long sunny days, the beach is always a good idea. Some of the beaches in Barcelona are favoured by the gay community, such as Platja de Sant Sebastià, which is a beach area where clothing is optional, located at the end of Barceloneta right by Hotel W. Platja de la Mar Bella is also another beach popular amongst the gay and nudist communities. These beaches make for the perfect spot to unwind on hot summer’s days in Barcelona, so what are you waiting for?! 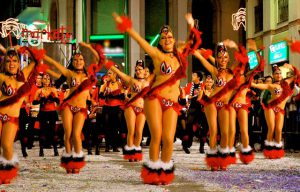 Additionally, just 35km southwest of Barcelona, is Spain’s premier gay beach resort, Sitges. The beautiful seaside town is a major destination for gay tourists, due to its wide range of gay clubs and bars. The LGBT community in Sitges takes a leading role in the wild Carnaval celebrations in February. But for sure, the town is also worth a visit during the summer season.

Every summer since 2008, the city of Barcelona has hosted one of the main gay pride celebrations in Europe: Pride Barcelona. For one week, the city celebrates an event of both protest and festive nature, reinforcing Barcelona’s strong commitment in the fight for rights and freedom for the LGBT community. This year’s main pride parade will take place on Saturday 30th June and is set to be the highlight of the week. Check out this video to get an idea of what to expect – it’s an LGBT extravaganza that’s not to be missed! 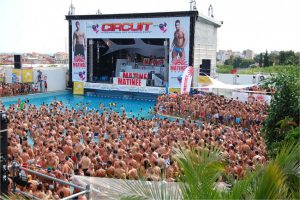 Barcelona is home to some of the world’s biggest gay circuit parties, and the most famous gay clubbing summer event is for sure Circuit Festival. With more than 15 parties, 40 DJs and tens of thousands of people, the 11-day Circuit festival is not to be missed. Each year, they host a waterpark day event where you can head to Illa Fantasia water park in Vilassar de Dalt, a village north of Barcelona, to continue the celebrations whilst enjoying the sun, water rides, and more music and performances. For many, this day is the highlight of the whole festival! This year’s edition of Circuit Festival takes place from 9th to 19th of August.

Each October, the International Gay and Lesbian Film Festival (FICGLB) is held in the city of Barcelona. Films include animations, feature films, short films and documentaries, which compete in a number of categories. The film festival promotes tolerance and respect for different sexual choices, and for only 4 Euros a ticket, it’s an absolute bargain that’s not to be missed! 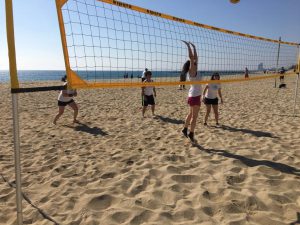 The 12th annual international multi-sport tournament for the LGBT community is hosted by the Barcelona sports club Panteres Grogues. From 14th to 16th September, those who attend will be able to take advantage of the summer season by practicing sports such as football, padel, beach volleyball, squash and yoga. Additionally, they organise social events during the dates of the tournament such as group dinners, brunches and after parties.

Organised by the Matinée group, every Saturday night the Girlicious Party for women takes over Bloc club, while if you’re in the mood for a lively Sunday evening, monthly parties such as La Ká take place at Sala Plataforma and Churros con Chocolate at Sala Apolo will have you sorted!

All in all, Barcelona is a diverse city that will keep you entertained and never feeling bored. Now you know the top LGBT hangouts, catch the next flight to the Catalan capital and stay in the heart of all the action in one of our centrally located apartments – Barcelona awaits!