Looking at a map of a new city can be a daunting task. With so many winding streets and unknown neighbourhoods, you may be wondering how on earth you’re going to get a grasp of Barcelona and its many districts. But don’t let this defeat you, the Catalan capital is actually a very accessible size and easy to navigate with quick and inexpensive public transport. To help out, we’ve complied a clear guide to some of Barcelona’s main barrios, or neighbourhoods, featuring a a whole list of noteworthy attractions that need to be on your list when visiting the city! 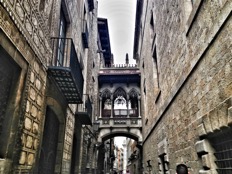 The Gothic quarter stretches from La Rambla to Via Laietana, and from the sea to the Ronda de Sant Pere. This ancient neighbourhood of Barcelona includes historical monuments such as the Jewish quarters and the Cathedral of Barcelona. Unlike the well-defined organisation of other neighbourhoods, the barri Gòtic has a labyrinth street plan, with many small streets opening out into squares. The Gothic quarter also offers the opportunity to explore many vintage shops on Carrer d’Avinyó, lined with small boutiques offering quirky clothes and jewellery. As the oldest area of the city, you can also find remains of Roman walls and many medieval buildings, as seen on Carrer del Bisbe.

Portal de L’Àngel, in the heart of the Gothic quarter is the busiest street in Spain, receiving 3,500 pedestrians per hour! Other places of interest in this neighbourhood are the townhall (Ajuntament de Barcelona), located in Plaça de Sant Jaume, and Plaça Reial, known for its lamposts designed by Antoni Gaudí and its lively nightlife scene, with many restaurants, bars and nightclubs such as Sidecar, Jamboree and Karma. Filled with history and culture, the Gothic quarter is a must-visit. 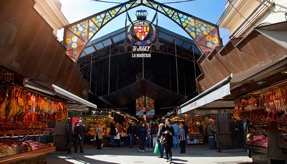 A hop across the other side of La Rambla to the Gothic Quarter, lies El Raval. This neighbourhood is full of energy, home to many locals but also welcoming an influx of tourists visiting the famous La Boquería market, which sells fresh produce as well as delicious tapas so you can refuel on your way round. Buzzing with bars and international restaurants, El Raval is a great place to head for an evening out. You can even sit where Picasso and Hemingway used to enjoy a glass of Absinthe in Bar Marsella, serving customers since 1820. El Raval also holds two museums that are well worth a visit: the Contemporary Art Museum of Barcelona (MACBA) and the Centre of Contemporary Culture of Barcelona (CCCB). La Rambla de Raval, lined with palm trees and restaurant terraces is also worth checking out for some evening food and drinks. A perfect way to round off your tour of this hip neighbourhood. 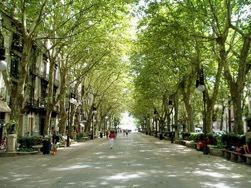 Adjacent to Ciutadella park and the jaw-dropping Arc de Triomf (two absolute must-sees!) lies El Born, home to the Picasso museum, the museum of textiles, high end boutiques, and a booming bar scene on Passeig de Born. It is known as one of the most fashionable places of the city. El Born boasts many picturesque squares such as Plaça de Sant Agustí Vell and Plaça de Pons i Clerch where you can sit out and enjoy delectable tapas and drinks. Stroll from El Born Market to the Basílica de Santa María del Mar on Passeig de Born, perhaps stopping for a cocktail or plate of patatas bravas along the way…

A former fishermen’s town turned beach community, Barceloneta is a busy hub of beach bars, or chiringuitos, ice cream parlours, watersport-goers, sunbathers, swimmers, roller-skaters and runners. When night falls, Barceloneta offers a thriving nightlife scene, lined with beachside clubs. For a chic and elegant night out, try the Carpe Diem Lounge Club, or if you want to party the night away, head to Pacha.

On one side is Port Vell, a notable waterfront harbour from where you can admire the yachts or visit the museum of the history of Catalunya. Take a trip over the water on the Port Vell Cable Car to see Barcelona from the air. Day or night, Barceloneta is the place to be! 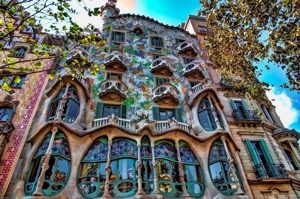 The Catalan word for ‘expansion’, Eixample is exactly that – built in the 19th century as an extension of the old town when it started to become overpopulated. Characterised by a grid pattern with long straight roads and blocks of houses, parts of the sophisticated residential neighbourhood were influenced by Gaudí’s Modernista movement. Eixample is a large area, split between a left and right zone, and is home to some of the city’s most notable architectural works. Stroll up Passeig de Gràcia, a long stretch lined with designer shops, and take in the eye-catching buildings around you: Casa Milà and Casa Batlló, beautiful architectural treasures created by Antoni Gaudí. Eixample is also home is Gaudí’s Sagrada Família. His unfinished yet perhaps most famous masterpiece is an absolute must visit. There’s no rush however, its projected date of completion is 2026! 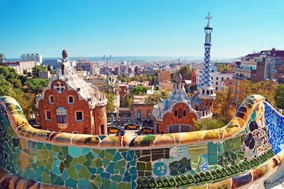 Gràcia is a trendy neighbourhood, located right above the Passeig de Gràcia, featuring many charming squares where you can find locals chatting and enjoying the sun with an Estrella or two. Boasting a lively yet authentic food, drink and nightlife scene, Plaça del Sol is worth visiting. Grab drinks at Café del Sol – a favourite amongst young locals! Another square worth a visit is the Plaça de la Vila de Gràcia, known for its old clock tower, this charming square is filled with cafés, terraces and small shops.

Gràcia is also characterised by the multitude of independently and locally owned shops – the perfect place to buy unique items at an affordable price. As if this wasn’t enough, the barrio also neighbours Antoni Gaudí’s, Parc Güell. This beautiful and vibrant park lies is one of the first things you need to see when visiting Barcelona. Not only is the park an architectural masterpiece but it also has one of the best views of Barcelona. Admire the winding mosaic bench as the sun goes down. The community of Gràcia offers a quaint and arty village feel, perhaps a welcomed escape from the main tourist areas after a long day of sightseeing! 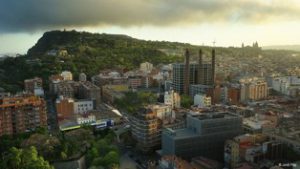 Meaning ‘dry village’, Poble Sec is well located, only a 15 minute walk from Las Ramblas, and 20 minute walk from the beach. This compact neighbourhood is filled with 19th century architecture. The well-known street, Carrer de Blai, is a long pedestrianised road with tapas bars running all the way down it, and locals sitting out on the terraces enjoy pinchos and cerveza. Pinchos are small tapas-style snacks such as chorizo or green peppers and fried eggs typically served on a slice of baguette. After satisfying your gastronomic desires, discover Avinguda de Paral·lel and its energetic theatre scene, the most famous of which is the Apolo with its own resident cabaret. Further up the street you’ll find El Molino a concert hall and finally, Condal Teatre where you can catch big performances such as The Lion King.
Another attractive factor of Poble Sec is that it lies at the foothill of Montjuïc, a huge expanse of mountainous parkland, famous for being the site of the 1992 Olympic Games. Offering plenty of opportunity for physical activity as well as sightseeing, you can hike or take a cable car to the top of the mountain. At the top, you’ll also find the Castell de Montjuïc, botanical gardens, the Joan Miró Foundation and, of course, astonishing views of the city. Check out our full blog post on Montjuïc.

Each of Barcelona’s neighbourhoods encompasses its own identity and offers something different. With so much culture to discover and secret hideaways to explore, there are endless activities to enjoy in the Catalan capital. Now you should be well-equipped with our guide to explore each of Barcelona’s main neighbourhoods. So get out there, journey away from the beaten path and make the most of your stay in Barcelona.