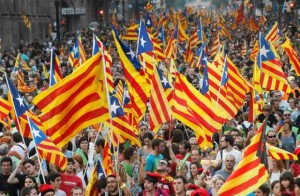 A National Day usually represents a triumphant victory, although this is not the case for Catalonia. The 11th September is a local holiday in Barcelona which commemorates Catalonia’s defeat on that day in 1714, when the Siege of Barcelona, which began in July 1713, ended with the city’s surrender to the Castillan army of Phillip V, during the War of Spanish Succession. This symbolic date represents the loss of liberties and oppression which Catalonia has since been fighting to overcome, and every year three massive street demonstrations in Barcelona, led by Catalan nationalist campaigners.

What do the Catalans really want?

The issue of Catalan independence has been increasing its momentum in recent years, and a significant percentage of the population is now in favour of breaking away from the Madrid-based Spanish government and establishing a separate and fully self-governing Catalan nation within the EU.

There are many claims in favour of independence; the most fundamental are identity and economics.  Many Catalans strongly feel that their language, culture and history give them a unique identity, which can only be truly validated as an independent country.

Catalonia is also one of the main contributors to the Spanish economy.  Its tourism and international commerce markets are especially developed, and every year billions of euros of Catalan taxes are sent to Madrid and redistributed throughout Spain.  Catalan Nationalists believe that it would be fairer for Catalonia to have fiscal independence, and that this would significantly improve its business infrastructure and strength. 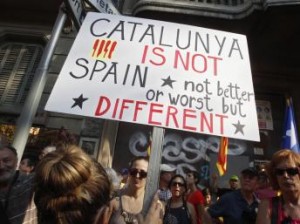 The right to decide – and its legality

Catalan Nationalists have been campaigning for many years for the right to call a referendum, which would give its people the vote on whether to establish an independent Catalonia or not. The head of the Catalan government,  President de la Generalitat Artur Mas (of the centre-right CiU party)  led a non-official referendum in November 2014. The questions were “Do you want Catalonia to become a state?” and “Do you want that state to be independent?” Turnout estimates published by media outlets range between 37.0% and 41.6%. 80.8% of the cast votes supported the Yes-Yes option, 10.1% the Yes-No, 4.5% the No option. However, the Spanish government did not recognize the results of the poll. According to their interpretation of the Spanish Constitution such a referendum would be illegal, as it violates the constitution.

An important insight into the debate on Catalan independence can be gained by referring to the current Spanish Constitution, which lays down the law of Spain and was established by the post-Franco transition government in 1978. It includes the Statute of Autonomy of Catalonia, a statement of the basic institutional regulations and rights of the Catalan government and its citizens.  This includes jurisdiction in areas that include health, transport, commerce and local government.  Decisions such as foreign policy, immigration, and the national budget and taxation are made from Madrid. 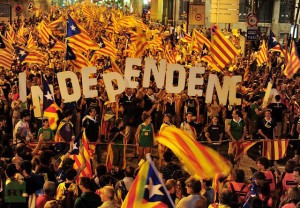 he tug of war of power

When proposed reforms to this Statute of Autonomy were presented in 2005, its biggest opponent was the PP, whose delegates were also the only ones to refute the definition of Catalonia as a “nation.” By the time it reached the voters’ referendum in June 2006 the Catalan Nationalists fumed that this reformed Statute had been too severely compromised, and the Spanish Nationalists argued that it gave Catalonia an unconstitutional amount of autonomy.

The Constitutional Court of Spain (which has many seats that favour the PP) analysed the constitutionality of these disputed articles and eventually delivered its conclusions on the 9th July 2010. Fourteen were to be re-written, and twenty seven re-interpreted. An unprecedented crowd of at least 1.2 million demonstrators took to the streets of Barcelona the next day in one of the biggest protest marches yet seen, under the slogan “Som una nació. Nosaltres decidim”. (“We are a nation. We decide.”)

Whether the Catalan people will be given the opportunity to decide or not still remains to be seen.

Stand and be counted! Demonstrations in Barcelona

This year’s Día de Cataluña will be m 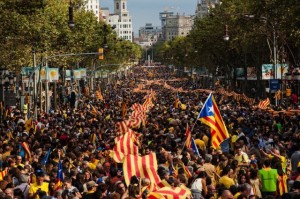 arked by another large demonstration in Barcelona. The streets from Passeig de Gràcia to Plaça Catalunya are closed to traffic, and surveillance helicopters look down on a solid mass of more than a million people waving flags and carrying toddlers on their shoulders. The annual “festa per la llibertat” stretches along Passeig Lluis Companys, from Arc de Triomf to the Ciutadella Park. In the evening there are often concerts with several Catalan bands. Look out for stalls selling t-shirts and books, and representatives from all the pro-Catalan political and social movements offer flyers and information.

The world is watching to see how this debate continues to unfold, through political discourse, social action, and decisions that are writing Catalonia’s contemporary history at an ever increasing rate.