Warning: count(): Parameter must be an array or an object that implements Countable in /furanet/sites/blog.apartmentbarcelona.com/web/htdocs/wp-includes/post-template.php on line 284
Skip to content
Hit enter to search or esc to close
Home  >  Culture • Home • Places • Things To Do • Tours • Visiting Barcelona  >  Castell de Montjuïc: An Astonishing View of the Past, Present and Future 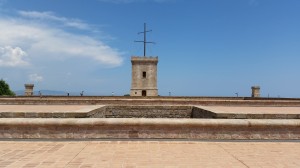 Looking for a place with fantastic views and intriguing history? Castell de Montjuïc is a must see for anyone who can appreciate magnificent, panoramic views over Barcelona! You can witness the city’s beautiful landscape from one of the highest points in the area. The stone castle dates back to the 17th and 18th centuries, which means it truly offers some extensive history. At 170 meters above sea level, your view of Barcelona is undoubtedly one of the best around and is fuelled with rich history.

The View of the Present

You can walk up the mountain if you’re feeling adventurous, or you can leisurely ride the cable car to the top and experience the incredible views from above. Along the Cami del Mar track, there will be some great shots as you serenely climb up, so don’t forget your camera! Or, you can rest your legs and see some of Barcelona’s most talented architecture while smoothly riding a cable car. Both paths lead to the same phenomenal place. 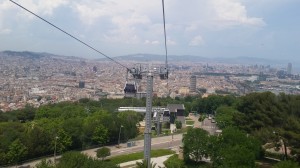 On one side of the Castell de Montjuïc you are greeted with beautiful views over Barcelona’s coast and the Mediterranean, while on the other you can see nearly the entire cityscape of Barcelona. You will see a near perfect 360-degree views from one of the highest points in the city, and fr only five euros you can explore the castle’s grounds, which includes a vast system of ditches, walls, and towers. Recently in 2014, the dungeons to the castle were opened to the public, making this a must for history-fanatics!

A Rather Dark Past

Up until 1960, Castell de Montjuïc had nothing but horrific marks on Barcelona’s culture. The site’s location made it a formidable vantage point for a military base. The walls of the castle are lined with cannons, making it easy to dominate the land and sea, many of which still remain today.

When Napoleonic troops invaded in 1808 the castle served as a political prison by the French for years to come. During the Spanish Civil War, Franco ordered many executions at Montjuïc Castle and in 1842 General Espartero ordered bombings of the city. He fired over 2,500 shots down upon Barcelona to put down a revolutionary uprising.

As you can see, the Montjuïc Castle in Barcelona has been plagued with calamities since its formation. The early to mid 1900’s did not take a turn for the better. More than 3,000 people were locked up due to the La Canadiense Strike, and 173 prisoners were executed by firing squad. Despite the fact that all of these atrocities took place, the citizens of Barcelona make a conscious choice to keep the castle alive in order to create better memories for the future. Delve deeper in to the castle’s history with a tour of the grounds. 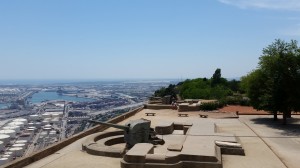 Castell de Montjuïc now reflects the optimism of Catalan culture. The citizens of Barcelona now have the rights to the site and plan on using the castle as an academic learning center and for leisure activities. Instead of having the site demolished, the Catalan’s decided the Castle should be used to celebrate their vast culture and history. The castle now hosts a variety of events, which include festivals, family activities, guided tours, and exhibitions. There is even an open-air cinema here durnig the summer months.

A Relaxing Site Nearby

In addition to concession stands on the site, you can travel a little way down the mountain and visit La Caseta del Migdia, where you will be greeted with excellent hospitality, great food and tasty refreshments. Catching the sunset at this spot will put anyone in a state of tranquility. On the opposite side of the castle, at Plaça de l’Armada, you will find even more great restaurants and bars overlooking the Port.

Metro: Paral·lel (L3 Green Line or L2 Purple Line) and transfer onto Montjuïc funicular train which will take you up the hill. Alternatively,, you can easily follow the signs and begin your walk up to the castle, or take the Montjuïc cable car. Tickets for the cable car are around €11.50 for an adult and roundtrip ride, while children under 12 are around €8.40.