Skip to content
Hit enter to search or esc to close
Home  >  Home • Things To Do • Visiting Barcelona  >  5 Secrets of Las Ramblas: Off the Beaten Track

Las Ramblas is the busiest street in Barcelona; thousands of visitors walk along the undulating paving stones that lead from Plaça Catalunya to Port Vell at every hour of the day or night. Yet even in the middle of the crowds there are a few hidden secrets that many will pass but few will notice. Open your eyes a little wider and don’t miss these delightful details off the beaten track in the centre of Barcelona. 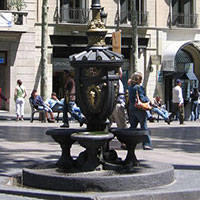 It’s said that those who drink from the Caneletes fountain, located towards the top of Las Ramblas, will one day come back to Barcelona. The origins of this quirky Barcelona legend can perhaps be traced back to when it was just outside one of the old city gates. It was known as the Contractor’s Gate, because employers picked out temporary workers from this very spot.

The workers obviously returned often and would have a drink of water whilst they waited for the next job, and thus the superstition was born. Will it just quench your thirst or prove the legend to be true? Take a few sips and find out for yourself! 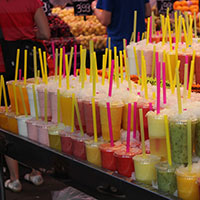 2. Bargains at the Boqueria Market

The colourful Boqueria market is always lively and crowded. Its stalls are piled high with everything from exotic fruits and seasonal specialties, to nuts and sweets, fresh fish and dairy products, and everything in between. Several Barcelona tapas bars line the perimeter; enticing aromas invite you to sample freshly made dishes while you watch all the hustle and bustle swirling around you.

So far, this sounds like the standard description of Barcelona’s Boqueria market that you might find in any tourist guide. But what the average tourist probably won’t know is that if you arrive before the market closes at 20:30 you can snap up some very tasty bargains. All the freshly cut fruit portions and juices have to go, so hang around and you won’t be disappointed. Three for the price of one? Oh go on then… 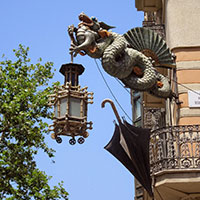 You might have noticed a scaly Chinese dragon hanging around on the corner of a building, just across from the Liceu metro stop. This Art Deco dragon was intended to attract customers to the umbrella shop that was once located in this Bruno Quadras building at the peak of the “Japonisme” movement in the 1860s. It is said that the dragon continues to watch over Las Ramblas.

Oh, the stories it could tell about Barcelona off the beaten track. 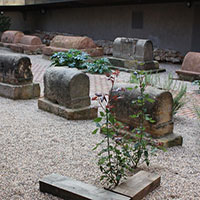 Turn left into C/ de la Canuda at the top of Las Ramblas and you will stray away from crowds and discover a surprisingly tranquil and non-touristy square. Here, a number of tombs lie just above a sunken garden. They belong to a Roman necropolis which was built outside the city walls. Small displays next to the tombs provide information about the burial and funerary customs of the time.

The tombs also have a few pieces of pottery on display. You can also browse for designer bargains at the Logo outlet store, enjoy a delicious vegetarian meal at Govinda restaurant, or have a coffee in one of the bar terraces that look onto this hidden Barcelona square. 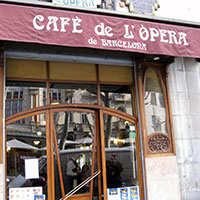 5. A historic café on Las Ramblas

The Café del Opera in Barcelona is one of the most historic establishments of Las Ramblas, and can be found at number 74. Its story began in the 18th century when it was a tavern where carriages would start their journey towards Zaragoza and Madrid. A century later the ale was swapped for something sweeter and it reopened as a “chocolatería” in May 1831.

When the Liceu Opera House was inaugurated opposite, in 1847, its current owners spotted a niche and it took on its current character. Travel back in time as you appreciate its Modernist design, furnishings and ambience.