Barcelona is renowned for its bright and daring festivals, and this June, true to form, the Catalan capital is set to celebrate the most magical fiesta of all: Sant Joan. Each year the Revetlla de Sant Joan, or Nit de Sant Joan, starts off the summer with a bang (literally!) as the city’s skies come alive with fireworks to celebrate Saint John’s day and the longest day of the year.

From wild beach parties to more tranquil family dinners, the people of Barcelona enjoy the festivities of June 23rd into the early hours of the next day, when popped firecrackers decorate the streets as a reminder of the fire-filled revelries the night before.

Read on and find out why this is one Barcelona festival you just can’t miss! 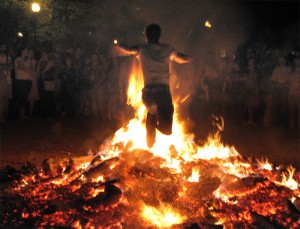 The central elements of the Sant Joan festival are fire and fireworks. Traditionally, the celebrations begin with the lighting of the flame of Canigó, a holy mountain peak in the Pyrenees. From there, the flame spreads down to bonfires, fire pits, and candles throughout the Catalonian regions of Spain and France with an estimated 3000 bonfires being lit from this one flame!

Many people take part in fire-jumping, the burning of old possessions, and writing notes with their wishes for the year and placing them into the flames. Of course, the nightlife in Barcelona comes alive for this special event, with bars and clubs across the city hosting parties and Sant Joan-related celebrations.

Barcelona Comes to Life: The Parties of Sant Joan 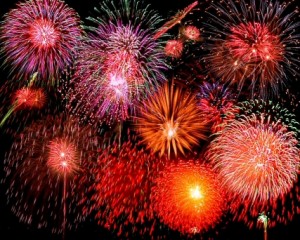 The beaches in Barcelona are packed to bursting with people during Sant Joan, since non-stop fiestas and bonfires line the shore, while the location provides a splendid view of the fireworks! Pack a picnic basket, grab some Cava and make your way to the beach, but be sure to do so during the early evening, or you may find yourself without a spot…

If you don’t fancy heading to the beach, make for any of the squares or plazas across the city, where you can catch some firework shows and plenty of celebration. An experience not recommended for the faint of heart, as sparks, fires, and fireworks will be flying around all night long!

Our recommendation for families with kids who wish to avoid the madness of this night yet still enjoy the spectacular firework displays, is to head to Montjuïc Castle where you can enjoy a panoramic view of all the fireworks in Barcelona. Another option is to visit the Magic Fountain of Montjuïc for a special light and water show!

More Than Just a Celebration 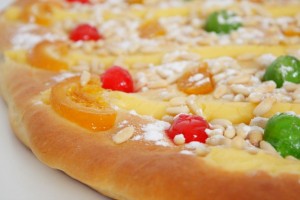 The nightlife in Barcelona certainly booms during Sant Joan, but there are also many customs and traditions surrounding these special festivities. For example the Coca de Sant Joan is the official cake enjoyed by all festival-goers on the night of the celebrations, and on June 24th, the actual day of Sant Joan.  Best described as a sweet flat bread, topped with pine nuts or candied fruits, enjoy this customary treat while you watch the skies light up!

Amidst the fireworks, fires and all night frenzies, the celebration of Sant Joan holds a significant value for the residents of Barcelona. On the 23rd of June, the sun reaches its highest point, before beginning to drop. Sant Joan also falls on the pagan holiday of the summer solstice where the sun is seen as a symbol of fertility and wealth and must be given strength and this very force is provided by the bonfires and fireworks that are lit for Sant Joan.

For those of you who want to get deep into all of the traditions of Sant Joan, you will find three more symbolic customs during this amazing event. For example, as fire symbolizes purity, and since it is such a big part of the celebrations, it is said that those who burn items in a Sant Joan fire will be cleansed of all past sins. What’s more, the water of Sant Joan is said to be symbolic of healing, and to hold remedial powers which can cure all ailments and illnesses, which is why you might see a few party-goers taking a late-night dip in the Mediterranean. Finally, some say that the remedying powers of herbs are enhanced during Sant Joan, so it is customary for people to collect them in the days leading up to the festival, ready to eat during the festival.

Sant Joan is one of the most anticipated events of the year in Barcelona, one where the streets are filled with excitement, energy and of course, fire! If you are making your way to the city with friends, we definitely recommend that you venture out onto one of the many beaches of Barcelona for an unforgettable night!