Situated over an impressive 18 hectares, Parc de la Ciutadella is Barcelona’s answer to New York’s Central Park. Perfect for long walks and picnics with friends, it’s one of the best places to escape the bustle of the city for a well-deserved couple of hours: a little piece of paradise in the city’s urban wonderland.

Start on Passeig de Lluís Companys, a pedestrianised avenue that takes you to the park via the Arc de Triomf. On the way, grab some breakfast and sandwiches for lunch from one of the local bakeries. Who doesn’t like cake for breakfast?

Once you’ve walked down Passeig de Lluís Companys and into the Park, now’s time to explore. Admission to the park is free and there are also many attractions within the park itself like the Barcelona Zoo, the Catalan Parliament, and the Museu d’Art Modern (located in the parliamentary building). We also recommend visiting the following places… 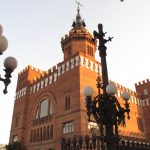 Built in 1887, this castle lives and breathes modernism through its combination of different styles and artistic techniques, in particular its towers and battlements which highlight the once popular Moorish style.

The building was closed as a result of the damage caused by the Spanish Civil War, and then briefly used from 1942-1945. However, it wasn’t until the 1980’s that the building was officially restored by architects Cristian Cirici, Pep Bonet and Carles Bassó. 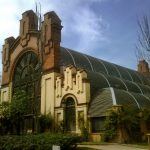 Although perhaps not the coolest destination for a hot summer’s day, this tropical greenhouse boasts an impressive collection of plants that love the shade almost as much as their visitors.

The design of the wooden roof allows enough light into the building so that a breath taking rainforest environment is created. Such conditions also encourage species originating from over twenty different countries to thrive under the Umbracle´s five steel arches. 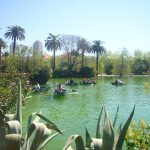 While the sun is at its hottest, why not cool off by renting a boat and exploring the Park’s very own lake? Boats are priced by 30 minute slots and start from as little as €6 for two people.

There is also a fountain in the park designed by Josep Fontserè. Rumour has it that Gaudí also contributed to the fountain, in particular the winged dragons that guard the waterfall (a figure common within the architect’s work). 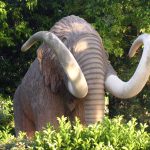 Dine a little bit later at Spanish lunchtime and enjoy your sandwiches under the shade of the many bandstands around the park.

Don’t forget to find the giant mammoth statue before you leave!

Return using the metro Ciutadella (L4) which is situated at the other end of the Park. If you don´t want to head back yet, head to the nearby El Born neighbourhood for ice cream or a little something more. We´ve written about a few of our favourite spots here.