Barcelona has a lot of places where you can enjoy a beautiful panoramic view over the city. From the stunning Montjuïc mountain to the colourful Park Güell, here is a list of locations that boast the most breathtaking vistas of Barcelona, with something for everyone’s budget! 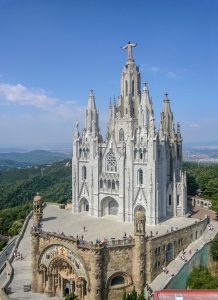 Tibidabo is part of the Serra de Collserola mountain range as well as the highest mountain in Barcelona; it rises above at 512 meters high. On the top there is a Tibidabo Amusement Park, restaurant Mirablau and the church Sagrat Cor, which you can also see from the city at night when it is all lit up. Tibidabo provides an astonishing view over the city at day and night.

Getting to the base of the mountain is easily accessible with public transportation. If you don’t want to hike all the way to the top of the mountain, you have the option of taking a funicular train. We recommend the Touristic bus T2A from Plaça Catalunya, only 2.95€ for a single and only takes 20 minutes to get to the top!

Tip: If you have fear of heights, but you have already reached the point that you are 512 meters high, then it’s not a problem to add 15 more meters, right? Check out the Ferris wheel on at the top of the mountain! A truly unique experience in one of world’s oldest Ferris wheels. 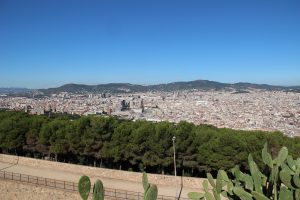 Montjuïc hill provides more spots with beautiful views of Barcelona. From the Montjuïc Castle, on top of the hill, you can grasp a view of the city’s buildings, harbor and the sea. There is also a cable car that goes to the top from Barceloneta Beach during which you can enjoy taking in the cityscape. Also, the front balconies of the MNAC (Museu Nacional d’Art de Catalunya) face the Montjuïc Magic Fountains, Plaça Espanya and the Serra de Collserola mountain range.

Tips: During the weekend, grab a seat on the stairs in front of MNAC for the Montjuïc Magic Fountain show. The spectacular display is accompanied by lights, lasers and music. You don’t want to miss it!

If you decide to take the cable car we recommend going at sunset. The sun glows beautifully behind the mountains with a range of the most vibrant colors, a lust for the eye! 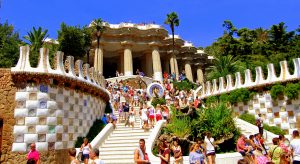 Park Güell is of course famous for its architectural masterpieces by Gaudí, but it also provides a colorful view of Barcelona. Take a seat on the mosaic-patterned benches at Plaça de la Natura and take a moment to enjoy this lovely panoramic cityscape; in the foreground you have the beautiful structures by Gaudí and in the background you will catch a glimpse of Sagrada Familia and the sea.

Tip: Head early in the morning and enjoy the view when the atmosphere is more peaceful. Park Guëll is one of the most popular places for tourists, so every day there is a big chance that it is going to be crowded. You will enjoy the park more if you wander through it as opposed to sticking to one area. 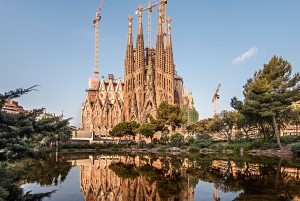 In terms of scenic views, we remain in the sphere of, who else, but Gaudí! Another masterpiece with a stunning view of city is the church of La Sagrada Familia. You can take the stairs or the elevator to the bridge between the famous towers of the church and enjoy and endless vistas of land and sea. 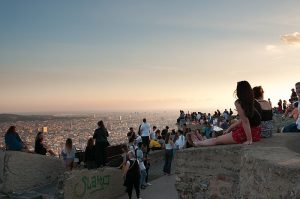 Probably the most unknown, but, in our opinion, the most breathtaking view: Bunker del Carmel (or Turó de la Rovira to give it its proper name). This site is an old military base that was originally built during the Spanish Civil War (1936-1939) to spot and fend off enemy airplanes during the Franco regime. After the Civil War, some people went to the old abandoned military base and occupied it as a residential community, also called the Cannonry.

It is one of very few places to have a 360-degree view over Barcelona In short, this place is amazing. To get to the top you can get the metro, however this will require a long walk up to the top. There are many buses including lines 24, V17, 92 and 119 that will take you close to the top so that you don’t have to walk as far.

Tip: Arrive at Bunker del Carmel before sunset begins. You will see the most beautiful colours in the sky pass by and the awakening of the city lights. Plus, bring some food, drinks and especially some good friends with you to enjoy the spectacular evening. 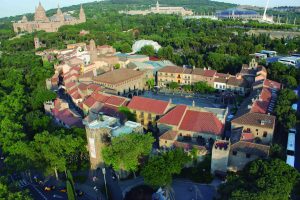 Poble Espanyol is a wonderfully artistic open-air museum/village that also offers a beautiful view of Barcelona. The village was built in 1929 and consists of many architectural features from different regions of Spain, such as Aragón and Andalucía. And the most important thing: the view contains the city and the Collserola Mountain chain in the distance.

Tip: Poble Espanyol is very loved among the tourists and can often get very crowded. We recommend you buy tickets in advance and bring some spending money for the neat little artisan shops inside.