Barcelona is a well-loved holiday destination for travellers from all over the globe. With its beautiful beaches and Mediterranean climate, people flock to the Catalan capital in summer for a sun-soaked, action-packed holiday every year!

However, the weather in the height of summer can reach peaks of up to 31°c, which can sometimes make it feel too hot to do anything at all! During this time, locals choose to escape the heat by heading on their holidays to elsewhere in Spain.

Visiting Barcelona at the end of summer is one of the nicest times of year to visit the city. The weather is still warm but manageable, with average highs of 26°c, and the locals have returned home, making Barcelona feel much more lived in again. Another bonus is that the tourist crowds of the peak summer months have calmed down too!

At the end of summer, the city is still alive with festivals and cultural events, as well as offering many outdoor activities to enjoy the sunshine and summer vibes. These are our top recommendations of things to do at the end of summer in Barcelona. 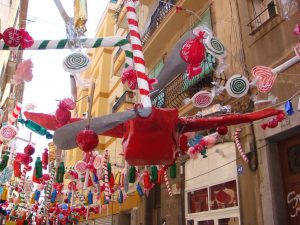 The middle of August marks the beginning of the biggest neighbourhood festival in Barcelona. The annual Festa Major de Gràcia begins on Sunday the 15th of August and runs through to August 21st, taking place in the picturesque streets of the Gràcia neighbourhood.

The main attraction of the Festa Major de Gràcia is a contest for the best decorated street. Each year has a different theme, such as ‘Under the Sea’ and ‘Ancient Rome’, and 19 streets throughout Gràcia compete with the most elaborate designs! There are also festive dances and music, with people coming together to celebrate this beautiful area of Barcelona. 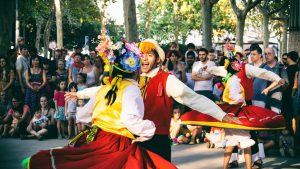 Hot on the heels of its neighbour, the Festa Major de Sants is another fascinating traditional celebration of the neighbourhood of Sants in Barcelona. It is held in honour of the patron saint of Sants, St. Bartholomew, beginning on the eve of the feast day on the 24th of August.

Expect to see a cercavila procession (which is a big musical parade), filled with the festival giants, musicians, and drummers. They also do correfocs (fire runs), where people dress up as devils armed with pitchforks, and set off fireworks through the streets. Don’t worry! It’s completely safe, and in the afternoon the youngest ‘devils’ take to the streets for the children’s fire run.

Experience the National Day of Catalonia

The 11th of September marks one of the most important days in the Catalonian yearly calendar, the Diada Nacional de Catalunya (National Day of Catalonia). It commemorates the fall of Barcelona during the Spanish War of Succession in 1714, and despite being a loss, the day has become a celebration of Catalan history and culture. Many museums host open house events, and there are usually concerts at the Festival of Independence.

When is it? 11th of September 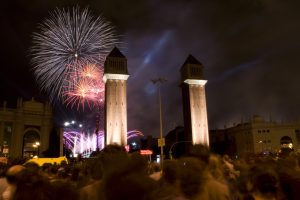 This exciting four-day festival has been held since 1902 and is Barcelona’s way of saying farewell to the warmer months and ending the summer season with a bang! This traditional celebration is held in the city centre every September in honour of one of the patron saints of Barcelona, La Mercè.

When is it? Starts on the 24th of September, but celebrations last over several days.

Taking place at the incredible Parc del Fòrum, DGTL is one of Barcelona’s top summer festivals. Bringing a taste of the Netherlands to the shores of the Mediterranean, here you can watch some of the biggest electronic and techno artists in Europe. Not only does this festival boast a great lineup and location, but also incredible special effects, from visuals to lighting, and even considerable efforts in supporting sustainability and awareness of the impact of festivals on the environmental and social landscape.

Events of previous years has seen the likes of Marco Carola, Ross From Friends (Live), Paco Osuna, and many more acts. The line-up for this year will be announced nearer the time, so make sure to keep your eyes peeled!

When is it? September 3rd to 4th

Head to the beach! 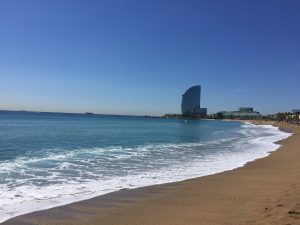 The weather towards the end of summer in Barcelona is a comfortable average of 26°c in the day, and there are reduced crowds with less tourists, and with locals getting back to school and work. This means its prime time for you to head to one of Barcelona’s many beaches and get your tan on!

For recommendations on the best beaches in Barcelona, make sure to read our blog all about it. 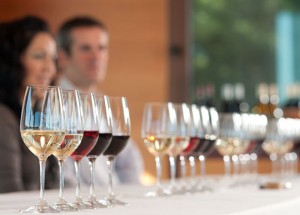 Barcelona is home to some of the finest wines and cava in the world, as the beautiful region of Catalonia is home to a plethora of vineyards that could give Napa Valley a run for its money! When the weather is still warm and sunny without being sweltering, we recommend going for a wine tour and tasting for a memorable day out from Barcelona.

Enjoy the last of the summer rooftop bars 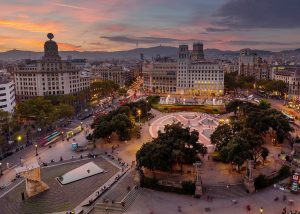 For the most breathtaking views in Barcelona, accompanied by some of the best drinks, we recommend heading to one of the city’s many excellent rooftop bars. After a day of sightseeing or sunbathing on the beach, there’s nothing better than catching the panoramic views of Barcelona at sunset, with a delicious cocktail in hand. Some even have live DJs performing, or even a pool to take a dip into.

Many of the rooftop terraces close from the start of October until springtime, so the end of summer is the perfect opportunity to get in there before they shut! 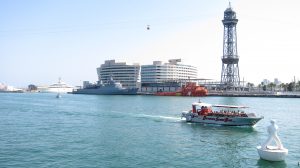 You can go sailing at almost any time of year in Barcelona, but it’s far more enjoyable to head out to sea when you can lounge on deck in a swimming costume and dive off for a cooling dip!

There are dozens of great boat trips you can do in Barcelona, whether you’d prefer to charter your own sailboat for a few hours or join a livelier ‘booze cruise’ for a fun afternoon with friends. To learn more about the different options, make sure to read our blog all about the top boat tours in Barcelona.