The coastal walking route along the Costa Brava is known as the Camino de Ronda, or camins de Ronda in Catalan. It is a historic path that was created to connect the nearby villages with the beaches and creeks, as well as being used by policemen and local authorities to patrol the coast as they kept an eye out for smugglers. The camins de Ronda are thought to have been used since remote times, a look out place for pirate attacks, or to provide access to the coves in the event of a shipwreck. They were particularly used during the Franco era when many products were rationed or forbidden. Smugglers brought items such as penicillin, coffee, tobacco, sugar, and chocolate, as well as other minor goods such as makeup, jewellery and silk clothes.

Nowadays, these coastal paths are some of the best ways to go for a lovely walk to see incredible landscapes and to discover hidden beaches and coves. Here are the best coastal walking routes on the Costa Brava that you need to try!

This route takes you along the Cap de Terra, an ascending cliff path with a beautiful bed of flowers across the grassy areas. Once at the top of the cliff, the path descends until it reaches the beach, which you cross to lead to the small cliffs that border the bay, with beautiful views of the town of Port de la Selva opposite.

The path continues along the perimeter of the coast to the tip of Cap de Bol, where you can see many anglers fishing. There are newly built wooden platforms to walk upon that make the route slightly easier by avoiding having to climb the cliffs. The route continues towards Llançà, a rugged coastline where you can see the Punta Podaire, the Island of Castellá d’en Lambert, and the Punta d’en Feliu.

A route best suited for hikers and those after a more challenging walk, this route has constant climbs and descents. The stunning panoramic views, however, make it all the worthwhile! 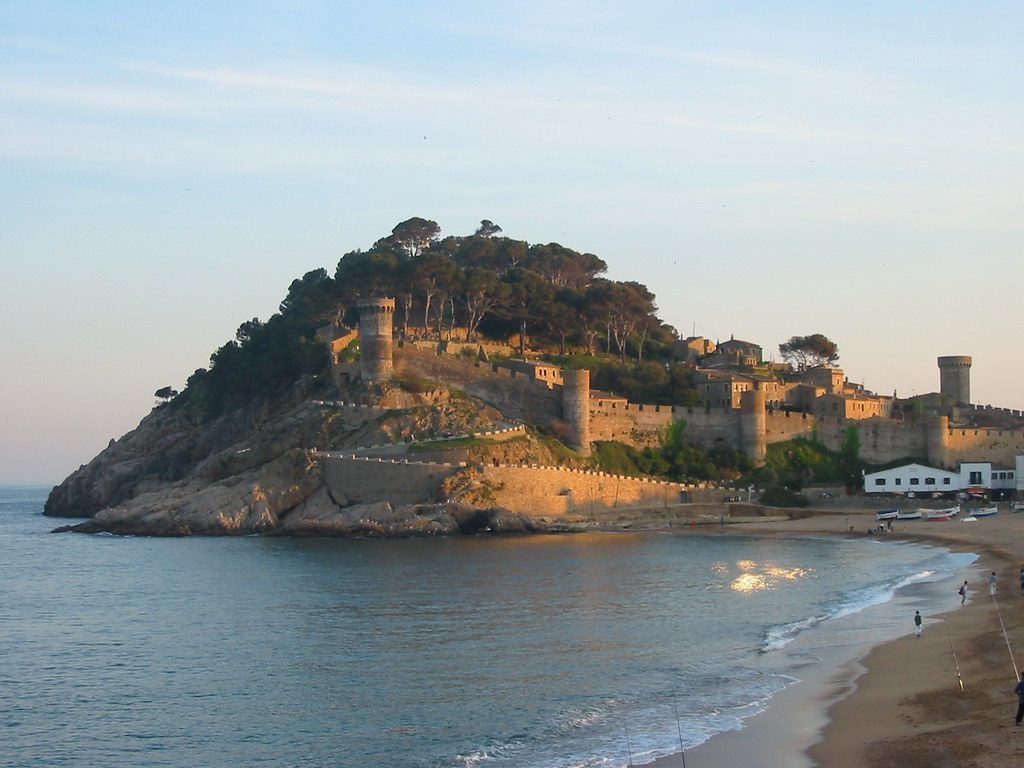 Cala Llevadó is a beautiful, sandy cove found between Lloret de Mar and Tossa, where you can park your car if you’re able to drive to start the route. It’s easy to follow, as there are white signs directing you to Tossa de Mar from the moment you begin. You pass the Cap de Sa Boquera, Sa Muladera Island, and many breathtaking coves along the way. The end of the route at Tossa de Mar is the highest point, where you can reward yourself with magnificent views from the Mirado d’en Cards. Hiking boots, a bottle of water and lots of energy are essential for this coastal path, as there are steep slopes and stony paths.

This path is an easier route as it is practically flat, so a great option if you’re walking with children. The route starts at the Roses lighthouse, just below the Trinitat castle, a flat footpath with some stairs, leading to Canyelles Petites Beach. From here you can see els Brancs, a small rocky island that is used as a resting place for various species of birds. 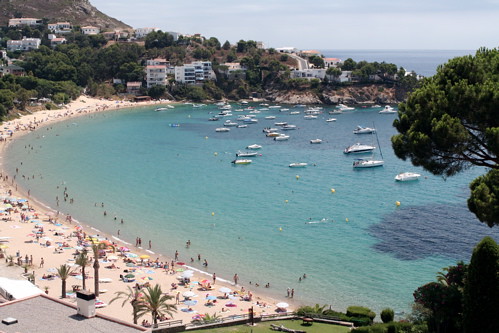 Continuing along from this stretch of beach, you follow the coastline until you reach the Almadrava Beach, which is named after the fishing technique used for catching tuna! Almadrava is the last large beach in the south of Cap de Creus before we enter the Natural Park. From here, you can loop back to the starting point, or extend the walk to continue to Cala Montjoi.

If you’ve got the energy for a longer, slightly more difficult walk and can’t get enough of this stretch of coastline, carry on until the Cala Montjoi. It is a narrow dirt path that heads into the Natural Park of Cap de Creus for just over 4km. It is about an extra 2.5 hours on the total round trip after the first section of the route until Almadrava, running through cliffs and pine forests. 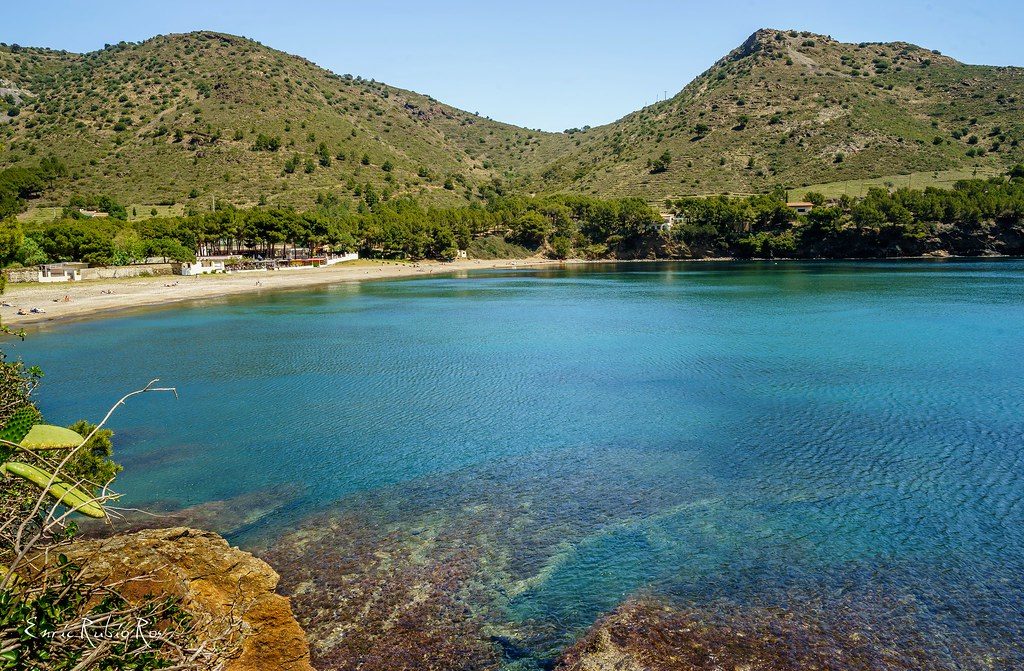 One kilometre after starting the footpath in Almadrava Beach, you come to your first stop at the Punta Falconera, with panoramic views to the whole Bay of Roses. From here the path steepens as the slope increases, before gradually levelling off. Enjoy the crystal-clear waters of the coves of Murtra (nudist so you’re not in for any surprises!) and Rostella, where you can see many divers and swimmers enjoying the areas.

Begin this route at the idyllic Sant Pol beach, an open, shallow water bar that is ideal for families with children and those wanting to get stuck into some water sports. The coastal path here runs along to the cove of Sa Conca in S’Agaró, where you pass by a variety of leafy vegetation and some amazing houses that you’ll want to stop and dream of living in!

From Sant Pol you head to the Cala Pedrosa, where there is an excellent viewpoint from which you can admire the panoramic views of the Mediterranean. From here you pass through the coves of Font and Les Vaques, which are rocky beaches, but with paths that have been maintained in excellent condition. Finish off at the Sa Conca cove, which has beautiful golden sands, and two beach bars that you can stop off at for a well-deserved drink and a bite to eat.

This is a family-friendly route, or for those with more limited mobility, around Palamós. Start your walk at Platja de la Fosca, a wide beach made up of fine sand, and warm, clear waters. Follow the path northwards, taking the flights of stairs that make the incline comfortable, and take in the panoramic view of Playa de la Fosca on the way to the medieval castle of Sant Esteve de Mar. 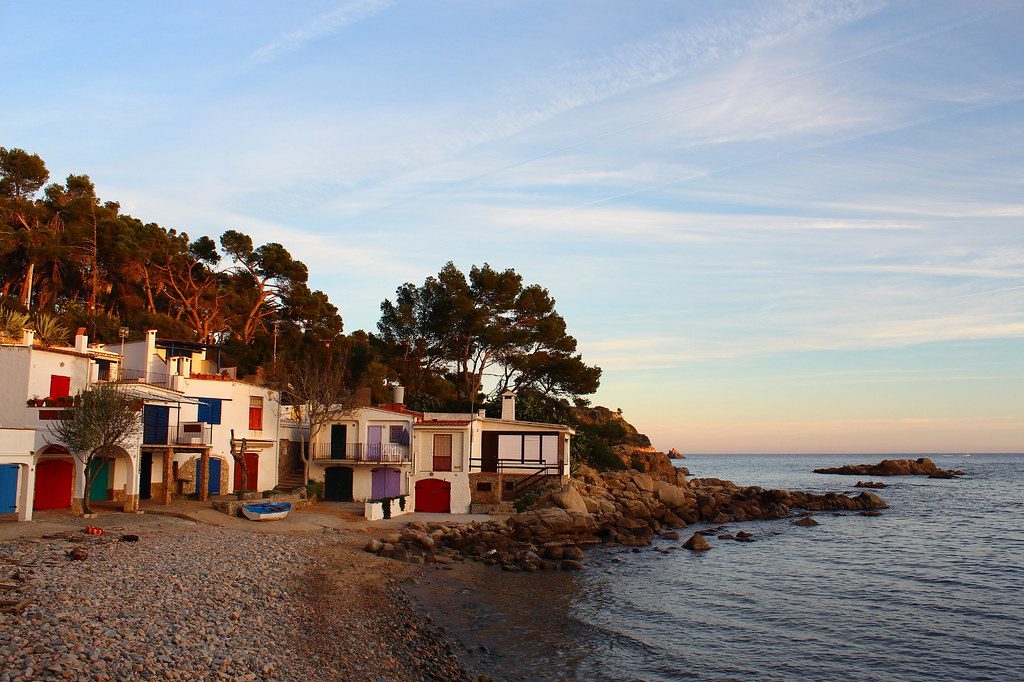 The path continues to the Cala de El Castell, before entering La Pineda d’en Gori, a breathtaking white pine forest. It is the perfect spot to stop for a picnic in the shade of the pine trees. From here another unmissable spot on your walk is the Cala S’Alguer, which has colourful fisherman’s houses dating back to the 16th century, that you’re sure to see feature on many postcards of the area. Carry on from this scenic spot to Riere d’Abui, overlooked by the l’Agulla de Castell mountain with restored remains dating back to the 6th century BC.