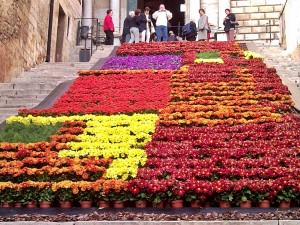 The petite and charming city of Girona is photogenic at any of time of the year, but wait ‘til you visit during its annual festival, the Temps de Flors. Each spring, during the second week of May, people flock from all over Spain to Girona’s Barri Vell neighbourhood to admire its colourful streets lined with spectacular floral displays.

Monuments and courtyards are transformed into remarkable ornamental gardens, so you can enjoy the wonderful ensemble of vibrant colours and glorious aromas which perfectly accompany the fascinating cultural and historical heritage of this city.

This unique way to explore the city often includes free entry and access to sights that would normally be closed to the public. And what’s more, the Girona Temps de Flors can be enjoyed all for free! 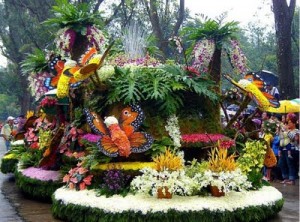 This year, from the 11th-19th May, Girona’s internationally famous flower festival will be celebrating its 64th anniversary, after its many years of success and unbelievable creativity. There will be over 100 individual flower and plant displays, with the most impressive exhibitions held at the Cathedral Steps, the Arab baths, Saint Nicholas’ Chapel and Les Sarraïnes.

In addition to this, there will be several other exciting events taking place throughout the city in name of the festival, such as the Gastroflors. Each year, a range of restaurants in the city offer themed menus with a floral twist where certain flowers will feature as an ingredient in their dishes; so let your taste buds ‘blossom’ by trying something new!

There will also be flower, photography and film competitions and plenty of other things worth getting involved in.

Girona: the City and the Barri Vell 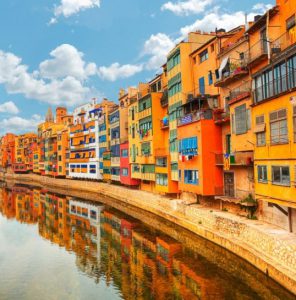 Girona is the ideal spot if you’re looking to escape the hustle and bustle of the Catalan capital, especially with it being just 100km from Barcelona. With all the charm and qualities of a larger city, thanks to its cultural richness and the myriad of things to do here, it would be foolish not to make time for this glorious medieval city during your visit to Barcelona.

The Temps de Flors only enhances the beauty of the quaint and quirky Barri Vell, Girona’s old quarter. Its rustic and French vibe has a certain ‘je ne sais quoi’ with its riverside flanked by multicoloured houses and winding alleyways that open out onto enchanting squares.

It truly is one of the most picturesque areas of the city, especially when covered with an exquisite selection of flowers. 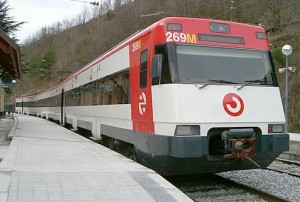 The best way to travel from Barcelona to Girona is from Passeig de Gràcia via Renfe trains. During Temps de Flors, the train company Renfe usually offers a discount on return tickets; last year it was 35% so it’s well worth downloading a voucher which can be found online.

Looking to keep fit and healthy this winter but not sure how or what to do? Read our blog for ideas on how to keep in shape when the weather is cold or wet in Barcelona.

Read More about Keeping Fit in the Winter Months in Barcelona: Exercise Ideas

Wanting to shop more sustainably and locally? We share our favourite and best independent, locally owned shops to visit all over Barcelona!