Tomorrow the city celebrates one of the most important days in its yearly calendar: Diada Nacional de Catalunya. As well as being a recognised holiday for all those living in Catalonia, the National Day of Catalonia is also an important event with an extremely interesting history.

The day commemorates the fall of Barcelona during the War of the Spanish Succession (1714) when Catalan institutions and laws were eventually lost in the city. This came after a 14 day siege between the Army of Catalonia and the army of King Philip V of Spain. Such defeat also marked the end to the principality of Catalonia.

If you’re visiting the city over the holiday, you should watch out for street traffic, disruptions on public transport, and many protestors and rallies. These usually start at 6pm so it might be better to do sightseeing before this time.

The first celebration of this holiday took place at the end of the 19th century, the same year that a statue in honour of famous Catalan icon Rafael Casanova was erected. Unusually however, this day marks a defeat rather than a victory, however many chose to view it as a reminder of the many Catalan liberties lost from the collapse of a Catalonian principality.

Over the following years the event gained popularity. In 1923 for example, more than a thousand floral offerings were made to those who led the defence of the city back in 1714. 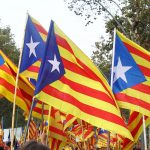 Although Diada Nacional de Catalunya was institutionalised during the Second Spanish Republic (1931-1939), it became suppressed by Francoist Spain and the monument of Casanova was removed.

In 1976, the National Day of Catalonia was celebrated again for the first time, and the following year Casanova’s monument was resurrected.

What to do on Diada Nacional de Catalunya

Although the holiday has since become synonymous with independence rallies and protests, it is also a celebration of Catalan history and culture.

Many museums in the city host open house events. A few to look out for this year are:

It is a tradition that citizens lay commemoration wreaths in homage to the troops who died defending Barcelona during the siege. These are usually laid by the monument of Rafael Casanova (at the junction of Carrer d’Alí Bei and Ronda de Sant Pere). At 9:00 on this day, Catalunya’s current and previous presidents, the Mayor of the city, and other dignitaries also attend this commemoration. 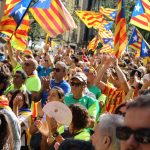 Many also lay flowers at the memorial plaza Fossar de les Moreres (by the Santa Maria del Mar), and the tomb of Casanova that can be found in the town of Sant Boi de Llobregat just outside Barcelona.

There are usually concerts at the Festa per la Llibertat (Festival of Independence) from 19:00. The festival takes place at the Arc de Triomf on Passeig Lluís Companys.

From everyone here at AB Apartment Barcelona, we wish you a Happy Catalan Day! Feliç Diada a tots. Feliz Diada a todos.