1992 was a pivotal year for the history of Barcelona. The Olympic Games during this year brought in a massive wave of changes that gave the city a new image, a much more contemporary one. Poblenou is one of Barcelona’s neighbourhoods that has rapidly transformed over the past 25 years from a sleepy suburb to a fascinating and vibrant area, a place of contrast. Attracting a lot of residents as well as locals to enjoy the weekend, this neighbourhood is the perfect harmony between industrial buildings, traditional Catalan architecture and futuristic skyscrapers. Of course, to top it off, one of the main reasons it’s such a popular neighbourhood is that it’s right on the beach. Sounds great right? Want to know more? Have a look at our handpicked list of places not to miss in this eclectic barrio! 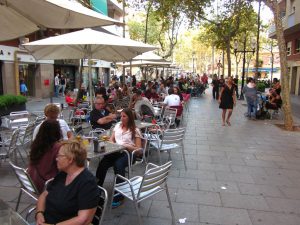 If you know anything about Barcelona already, chances are you’ve heard of Las Ramblas. The pedestrianised street runs from the main square, Plaça de Catalunya, all the way down to the sea. Not too dissimilar is La Rambla del Poblenou, the neighbourhood’s main street and a landmark in its own right. This wide promenade stretches just over 1km from Avinguda Diagonal all the way down to the grassy patch that lies just in front of the beach. Lined with tapas restaurants, bars and ice cream parlours, it is always buzzing with activity, attracting mainly locals (unlike Las Ramblas) due to its slightly further distance from the city centre. So if you’re looking to experience authentic Barcelona, this is a great place to start. Hop from one tapas bar to the next with a group of friends as you make your way down towards the sea, discovering the best of Barcelona.

Tio Che is one of the most famous and loved places not only in Poblenou but in Barcelona in general. This classic horchateria has a long history and during the years it has been run by 5 different generations. Located on Rambla del Poblenou, this is a must-visit during a Sunday afternoon stroll. Their products range from the classic horchata (a cold sweet drink enjoyed in the summer) to ice-cream, rich creamy smoothies, chocolates and pastries…any sweet treat you can think of, Tio Che serves it! This is a must for during the warmer temperatures.

Design and architecture are a significant part of this neighbourhood so it’s no surprise that one of its streets is home to a Scandinavian vintage furniture shop. The store is managed by Sara and Martin who often travel north to get their hands on these fabulous pieces that they define as ‘contemporary vintage’ (…if such a thing can exist!). Most of the products they sell come from Sweden, Denmark and Norway but are the perfect mix between shabby and chic to suit the Barcelona style and give visitors inspiration. Included various times in the popular Architectural Digest guide, this is a place not to miss out on for design enthusiasts. 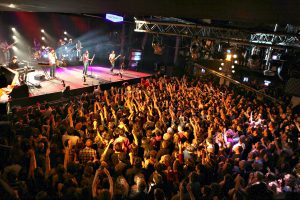 For the party lovers out there, Razzmatazz needs to be on your list. Not only is it one of Poblenou’s biggest landmarks, but it’s also one of Barcelona’s biggest and most popular clubs, amongst locals as well as visitors. It features five different rooms that are essentially individual clubs themselves, each playing different music ranging from indie rock to techno. Further still, with different nights on throughout the week, as well as frequent live acts, there truly is something for everyone. Consult their online calendar to pick your night and make sure you squeeze in a much needed siesta before you go as believe us, you’ll be dancing the night away until the early hours!

Bread is a basic necessity, a product that you can find in every part of the world, made using only a couple of ingredients but transformed with the simplest of additions into a whole array of different forms. If you’re a true bread lover and can’t stand the industrial supermarket type then we have a little gem for you to discover. Cruixent is the name for this amazing bakery, meaning ‘crunchy’. Not only is the name itself appealing but walking past it you will be instantly hypnotised by the big variety of bread displayed in the window. It’s not just looks, their products are truly good because they’re made with dedication and knowledge. They say there are 3 crucial things that make their bakery so great. Firstly, there’s the dough which is made with various grains and fermentations, resulting in a nutritious and healthier bread. Secondly they know that each style of bread needs a particular type of flour, you can’t just use one. And lastly, the process of making the product is essential: no rushing and no artificial help, just the natural way. We couldn’t recommend Cruixent enough. Pick up some freshly baked goods to enjoy this weekend. 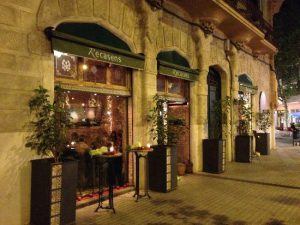 On the ground floor of a typical modernist building overlooking Rambla del Poblenou you will find one of the most popular Catalan restaurants. Can Recasens dates back to 1906, born first as a winery/deli for the neighbourhood, during the years it evolved into one of the most appreciated traditional restaurants of Barcelona. If you are looking to have a real approach to Catalan cuisine then this is the place for you. Here you can taste some of the best cheese and cold meats and even better, you can actually purchase them right after your meal. Apart from the amazing food we recommend this restaurant for its rustic yet charming atmosphere, complemented with flowers, wine bottles and dim lighting. If you’re a jazz fan then don’t miss their jazz sessions on Wednesdays nights.

We’ve all made that pact at least once before: eat healthier. If that’s your goal for 2019 or you simply like good nutritious food then you need to drop by Sopa. With sister restaurants in Madrid and Bali (!), Sopa serves amazing vegetarian creations from fresh produce. In fact they only use vegetables, fruits and cereals from local farmers and only when in season. Among the many dishes you will find rich salads, woks, rice, delicious sandwiches and needless to say…soups! Take advantage of their menu del día and try two dishes for just 10.50 Euros. Already started feeling healthier? Well on top of this, Sopa gives you the chance to take it a step further by offering Mandiram yoga classes to improve your posture and breathing. Enjoy a breezy stroll on the beach of Poblenou and then head to Sopa to pamper yourself with some good greens and stretching…. Namaste! 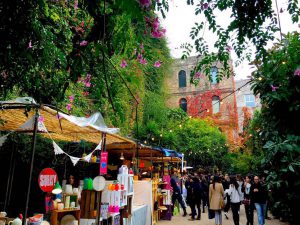 Palo Alto Market opens its doors every first weekend of the month (excluding August) to welcome both locals and visitors to peruse the market stalls offering a trendy mix of cool clothing items, quirky handmade jewellery, trendy accessories and of course, mouthwatering food and drink. With live music including acoustic artists playing in the open air leafy garden, to bands and DJs playing inside in a concert-style room, there is plenty to keep you entertained. Snap up some cool buys for yourself or gifts for friends and family before trying one of the exotic street food dishes washed down with a cerveza or vermut. When the sun’s out, make sure you book at ticket in advance to ensure you don’t miss out! 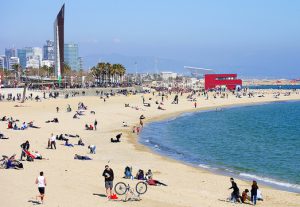 Last but most certainly not least is of course, the beach! Poblenou is famous for its proximity to the Mediterranean, making it such a popular place to live and hangout at the weekend. With watersports, cycling, skateboarding, rollerblading, walking and sunbathing all at your fingertips, it’s the perfect place to immerse yourself into the heart of Barcelona life and enjoy the great outdoors. Stroll along the Passeig Maritím and head to Bogatell beach where you can try your hand at volleyball or simply sit at a chiringuito, enjoying a cold drink and plate of patatas bravas. Any time of year (provided there’s sun which there usually is in the Catalan capital!), the beach is a great place to hang out.

With everything you could possibly need at your fingertips to try out some of the most authentic places the city has to offer and discover the best of Barcelona life, Poblenou is the place to be! Still not convinced? Why not check out our guide to El Raval for some hip and ‘off-the-beaten-track’ hangouts.