Barcelona is undoubtedly one of the most popular tourist cities in the world, with many top attractions such as the Sagrada Família, Camp Nou and of course its long sandy beaches. If you’re ready to see a different side of Barcelona, ready to experience life like a Catalan might, from learning the language to cultural traditions, this handy guide to living like a local in Barcelona should help you on your way. 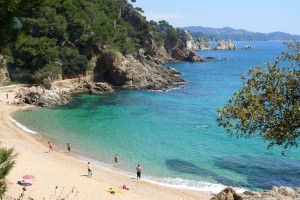 Kick back and relax

Where will you find the locals of Barcelona spending their weekends? Many head to the Pyrenees mountains north of Barcelona to enjoy some quality family time, whether it be skiing during the winter months or relaxing by the lake during summer. The beach is also a popular destination for residents during the summer months, but if you truly want to live like a local in Barcelona, avoid Barceloneta beach at all costs and head to one of many beaches just outside of the city such as Castelldefels, Montgat or Garraf, and even beaches further afield such as Cala de Sant Francesc and Calella de Palafrugell.

Parc de la Ciutadella, although a tourist attraction in its own right, is often flooded with locals on Sunday afternoons for various events such as charity galas, salsa classes and free concerts, making it the perfect place to blend in! Turó de la Rovira (a.k.a El Bunker del Carmel) is another popular spot for the residents of Barcelona. This hill, a former bunker from the Spanish Civil War, is located next to Park Güell and offers amazing, 360 degree views over the city without the hoards of tourists, making it the perfect place for a quiet picnic. Bus V17 from Port Vell, or bus 119 from Carmel, will take you directly to the top of the bunker. Alternatively, you can reach the top of the steep hill in 20 minutes from Alfons X metro station (L4).

Barcelona is a bilingual city in which most signs and announcements are in Catalan rather than Spanish. Speaking Spanish is more than enough, however if you truly want to blend in here are some informal Catalan phrases to help you on your way…

Hello = Hola
Good Morning = Bon dia
Good Afternoon = Bona tarda
Good Evening = Bona nit
How are you = Com estàs?
Good, thanks, and you? = Bé, grácies, i tu?
How much is this? = Quant costa això?
I don’t understand = No ho entenc
Goodbye = Adéu 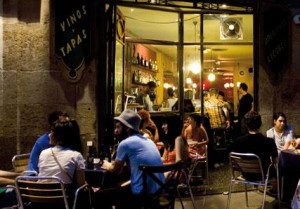 First things first, dining like a local in Barcelona means you’ll have to eat your dinner in the late evening, around 10pm. And tapas? It’s just a snack, not a meal! One tasty tapas dish that is the epitome of Catalan cuisine is pa amb tomàquet (bread with tomato) – said to originate from Catalonia, you will find this served at many restaurants throughout the city, often as an appetiser.

In the Poble Sec neighbourhood of Barcelona, on C/ Blai, you will find an array of pintxo bars. Here you will find many natives enjoying a beer and the best of these tasty bite sized snacks amongst friends.

Within the quaint streets of the Gràcia neighbourhood, away from the shopping centres and fast food chains, you will find many local bars, restaurants and cafés just waiting to be discovered. Plaça del Diamant is a great place to start. This quirky, hidden square is the go-to place for the residents of Gràcia when meeting up with friends and family. A few of our favourite spots in Gràcia include Taverna El Glop, a tasty Mediterranean restaurant with a BBQ twist, and Gasterea, the best place to grab tapas and a drink.

As for the bars and clubs in Barcelona, they tend to get busy after 12 midnight and parties often last until the early hours of the morning. If you want to experience nightlife in Barcelona like a local might, avoid the likes of Las Ramblas, Barceloneta and head to El Born or El Raval for a huge variety of bars, cafés and clubs. Still located in the centre of the city, these neighbourhoods are well known amongst residents more-so than tourists. 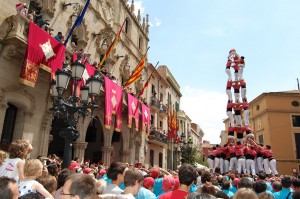 There’s always an excuse for a party!

Throughout Barcelona, Catalonia, and the rest of Spain, you will find there is a fiesta almost every other week. Whether they’re welcoming summer with a bang at the beach or celebrating the city’s patron saint in the streets, the people of Barcelona sure know how to throw a party! One of the most popular celebrations in Barcelona is La Mercé in September. This festival is in honour of the patron saint of Barcelona, Santa Eulàlia, and sees some crazy traditions take to the streets. From ‘correfoc’ fireruns to human tower building, this is one local festival you just have to get involved in!

Barcelona is one of the best shopping cities in Europe, and the infamous shopping street Passeig de Gràcia is something you must experience at least once in your life. However if you’re looking for something different, something less well-known than the likes of Portal de l’Àngel, where the people of Barcelona might go to add to their wardrobes, we recommend the quirky boutiques within the El Born neighbourhood. Here you are guaranteed to find some of the latest trends straight out of Barcelona, all for a reasonable price.

Barcelona’s markets are also popular with the locals in the city. La Boqueria food market, on Las Ramblas, has become one of the biggest tourist attractions in the city. You won’t find many residents here, however. The people of Barcelona prefer to shop at their neighbourhood markets – every neighbourhood has one!  A popular alternative to La Boqueria is Mercat de Santa Caterina, a colourful market in El Born with all the qualities of La Boqueria, minus the hoards of tourists. 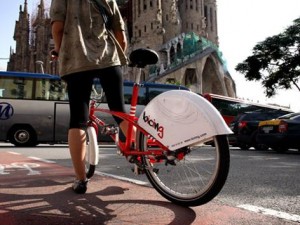 Public transport in Barcelona is used equally by tourists and local citizens. Without a doubt the metro and bus links in the Barcelona are extremely convenient, but the latest craze to hit the city is cycling. Barcelona’s bicycle culture was brought to life by Bicing, a local bicycle sharing system, and the improvement of the cities cycle lanes.

Although not as well-known as the likes of Amsterdam and Copehagen, cycling has fast become a popular method of transport in Barcelona. If you’ve made the move to Barcelona you can get on board the bicycle sharing scheme, but unfortunately it’s only for residents. If not, you can always rent a bike from one of many top rental companies in the city and live like a local in Barcelona for a day!

The ultimate way to feel like a Barcelona local is to rent an apartment rather than stay at a hotel. You can step out your front door onto the streets of the city, try out some typical Mediterranean recipes in your own kitchen (dining al fresco on your own terrace in the warmer months!) and stay together with friends and family all in the same place.

Spending New Year’s Eve in Barcelona? Good choice! From beach parties to light shows, plus plenty of fantastic fiestas at some of Barcelona’s top clubs, find out all about the celebrations on offer for NYE 2022 in Barcelona as we see out the decade in style!