Skip to content
Hit enter to search or esc to close
Home  >  Home • Things To Do • Tourist Guide • Tours • Visiting Barcelona  >  Barcelona Tours on Wheels: How Do You Roll?

Barcelona is one of Europe’s top destinations, so it’s hardly surprising that most visitors aren’t here for the first time and have already checked out Barcelona’s main sights. Sounds familiar? But even the old timers will enjoy seeing the Catalan capital from a different perspective with a ”wheely’ good Barcelona tour.
Discover a different Barcelona through the eyes of experienced local Barcelona tour guides, who might also give you some great tips for the rest of your stay. But first, read on to decide what kind of vehicle suits you best, and what your perfect tour in Barcelona would be like.

Zip around town in these funky yellow cars and follow the GPS Barcelona guided tour routes. There are plenty of routes to choose from. There’s a full 8 hour sightseeing option that covers pretty much everywhere, from the Parc de la Ciutadella to Las Ramblas, Plaça Espanya and Montjuïc, Port Vell, the Sagrada Familia, FC Barcelona Camp Nou, Plaça Catalunya, and everywhere in between. There’s a shorter Barcelona Gothic district tour, a Gaudí tour, and tour of the Olympic area. Alternatively you could switch off the GPS and go freestyling on your own initiative around the back streets of Barcelona in what appears to be a dodgem car let loose on the streets. 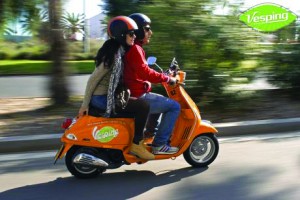 If you’re confident on a scooter then take a guided Vespa tour around Barcelona with Vesping. Their team of local experts live, breathe and absorb the city’s subtleties and are eager to share it all with you during their personalized Barcelona scooter tours. Galleries and museums, restaurants and bars, top sights and hidden gems; see the Barcelona that attracts you most. You could also choose one of the self-guided GPS routes: Gaudí tour, Olympic tour or beach tour. Strap on you helmet and hit that pedal! www.vesping.com 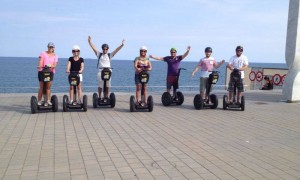 You must have seen those strange looking two-wheelers by now, but have you taken a Segway for a spin yet? It’s remarkably easy to get the hang of and a lot of fun. Glide along the seafront promenades, discover the Roman ruins of Barcelona’s Gothic district, and listen to the spring breeze carrying the sound of birds chirping and lions roaring in the Ciutadella Park. Segway tours in Barcelona are an original way to see the city. A night route is also available with Barcelona Sun & Segway. www.barcelonasunsegway.es 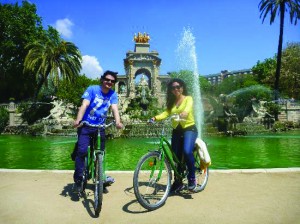 Barcelona by Bike: an environmentally conscious and healthy tour

Fancy a set of wheels but still prepared to make a bit of effort yourself? Bike rental in Barcelona is widespread, and most bike rental companies also offer their own variation on the classic Barcelona tourist routes – the Gothic, the beach, Gràcia and Montjuïc. Green Bikes offer 3 ½ hour bike tours in Barcelona that start in the Gothic. Barcelona is a very bicycle-friendly city, so you could also get a map and follow your own route along the bike lanes. A particularly attractive street for cyclists is Enric Granados, which crosses the Eixample. 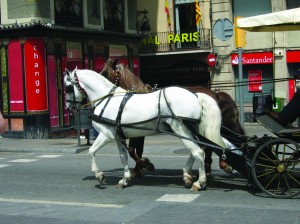 Horse and carriage in Barcelona for nostalgic romantics

Imagine yourself in the Barcelona of Carlos Ruiz’s popular novel The Shadow of the Wind, with street lamps glowing against the dusk sky as you regally look down on the people milling around below from your horse and carriage.

You’ll have to imagine pretty hard, but if you focus on the clip-clop of hooves that helps. Carriages await at the bottom of the Ramblas on the left. This is also a great tour for children, especially if you are with a young princess. 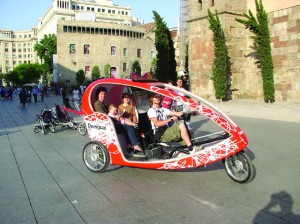 Barcelona beach route on a Trixi

Support the twenty-something-year-old travellers who are living it up in Barcelona and hop in the back of one of their Trixi bikes!  These oversize bikes in Barcelona, with their bubble seat in the back, are especially popular along the seafront, and are great for nipping through the narrow streets of Barcelona’s old town and around the Cathedral. Be prepared to wave at all the kids who stare as you cut through the crowds. This kind of transport is guaranteed to put you in the holiday mode immediately, as it’s so far removed from how we would normally experience a city.

There are countless ways of exploring Barcelona, so why not try something different this time? The more curious and receptive you are the more interesting details and quirky anecdotes you’re likely to pick up, so stay alert and enjoy!